A day in Pisa

After a couple of leisurely days in Florence, we1 started looking for nearby places we could visit. Pisa stood out - not only for a chance to see the famous Leaning Tower of Pisa, but also for the direct, 49 minute train ride to Pisa central station at an affordable 17.20 € for the both of us.

We reached Pisa around noon. We had plenty of time to visit the famous tower so we took a route that would allow us to see as much of the city as possible2. This being Italy, we first stopped at a local café for an espresso and some cookies.

Our route took us past narrow streets and small local churches whose outside walls were often adorned with brilliant murals of Mary and baby Jesus. 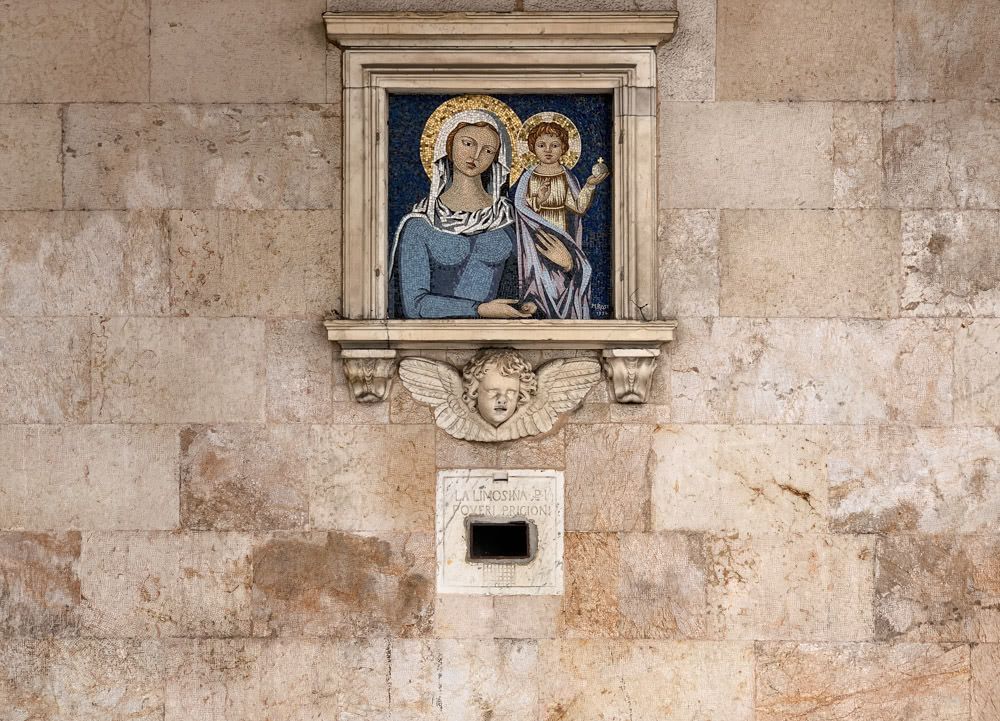 A mural of Mary and Baby Jesus

The river Arno bisects Pisa into southern and northern halves. It is roughly half-way between the train station and the Leaning Tower. Moderately busy roads and rows of squat buildings line both sides of the river. The sun-beaten facades of the buildings were painted in shades of ochre, mustard, vermilion, orange and maroon that resplendently reflected in the still water of the river. 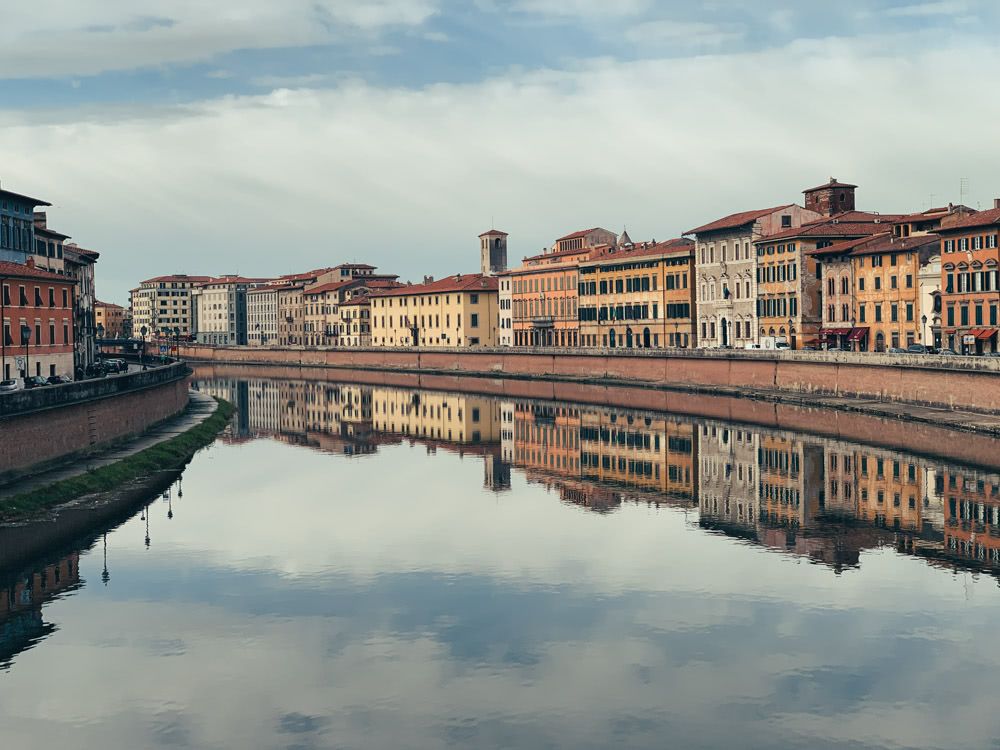 We approached the Leaning Tower of Pisa through an unpretentious, residential street. There were cars parked along the approach to the tower’s entrance and for some reason they seemed to be banking in a direction opposite to the tilt of the tower; as if trying to compensate for its tilt. 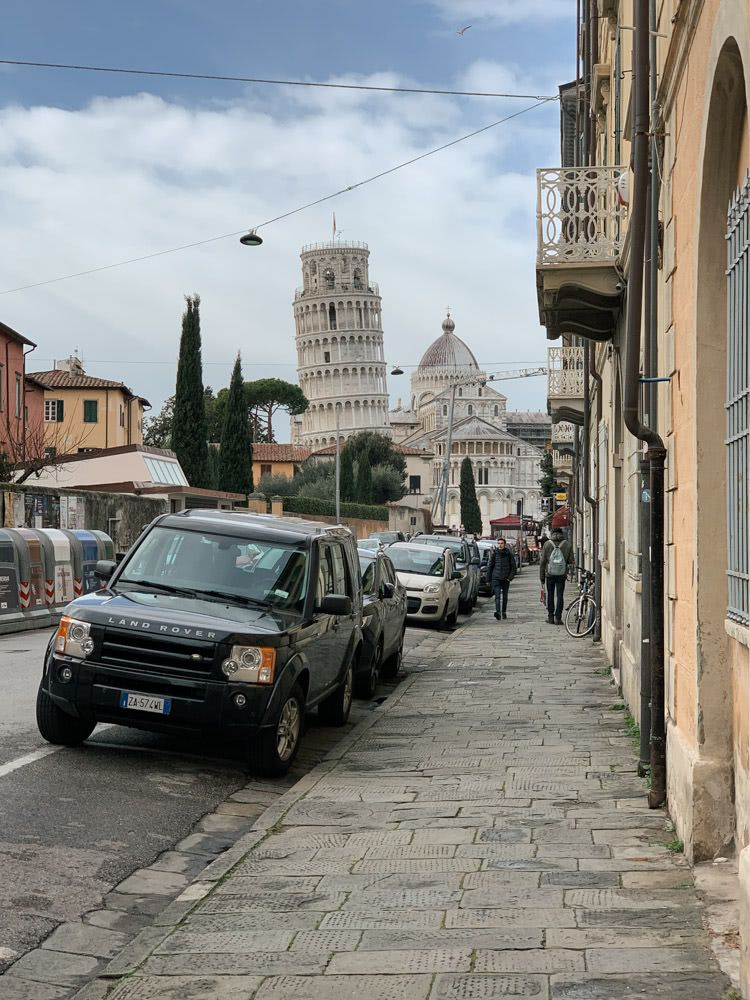 The Leaning Tower of Pisa

Tourists were posing for pictures that’d make them look like they were trying to correct the inclination of the tower. The tower has a kind of delicate beauty to it. It isn’t its grandeur that draws millions of visitors to it each year3, but its tilt. The attempts to correct the tilt have been going on for years. Once they straightened it up a little and checked against its further deterioration, they might’ve deliberately stopped short of restoring it to its erstwhile erectness. The Leaning Tower of Pisa sans the Leaning, just wouldn’t draw as many tourists. 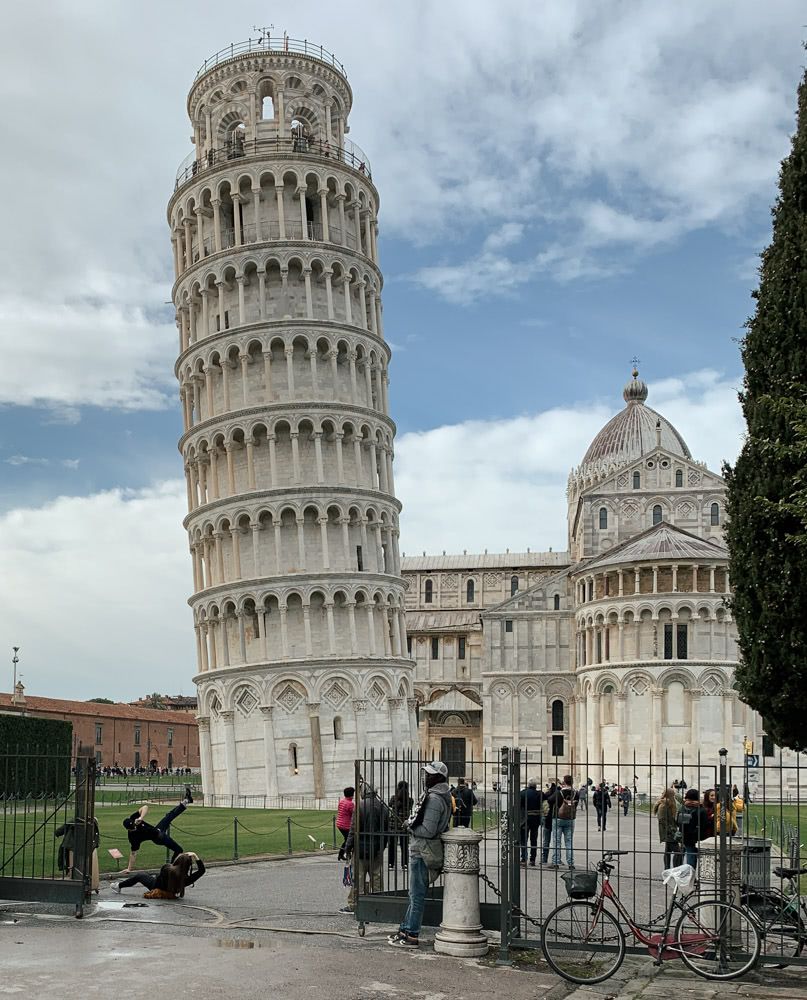 The Leaning Tower of Pisa

The Leaning Tower of Pisa is part of a larger complex of historical buildings that includes a cathedral, a baptistry and monumental cemetery. The entry to the complex is free but if you want to climb the tower, you need to buy a ticket. A separate 8 € “4-in-one” ticket will grant you entry into the cathedral, baptistry, the monumental cemetery and a museum (Sinopie Museum) next to the complex.

When we entered the monumental cemetery (Campo Santo), the sun was beginning to shine weakly from behind the clouds. The traceries of the Gothic windows that lined the cemetery’s large inner hall, cast soft shadows on the wall opposite. 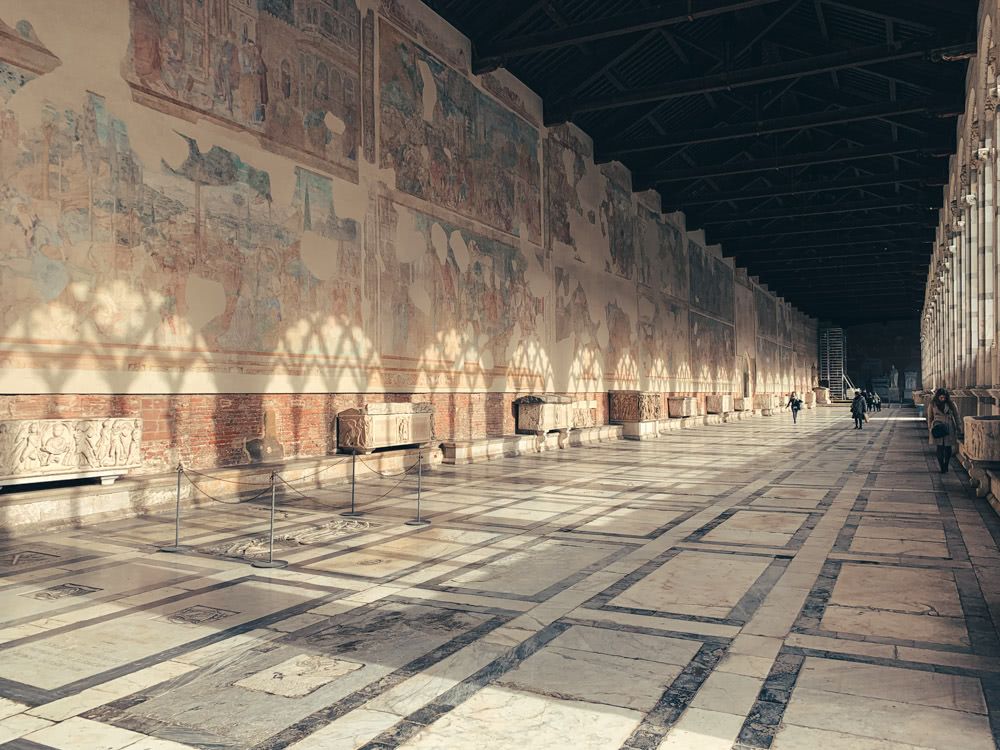 The wall was covered in frescos that were faded or erased in parts. One hopes they’ll be restored one day4. The ones you could make out, depicted familiar Biblical themes of saints, Judgement Day, and diabolical visions of hell. 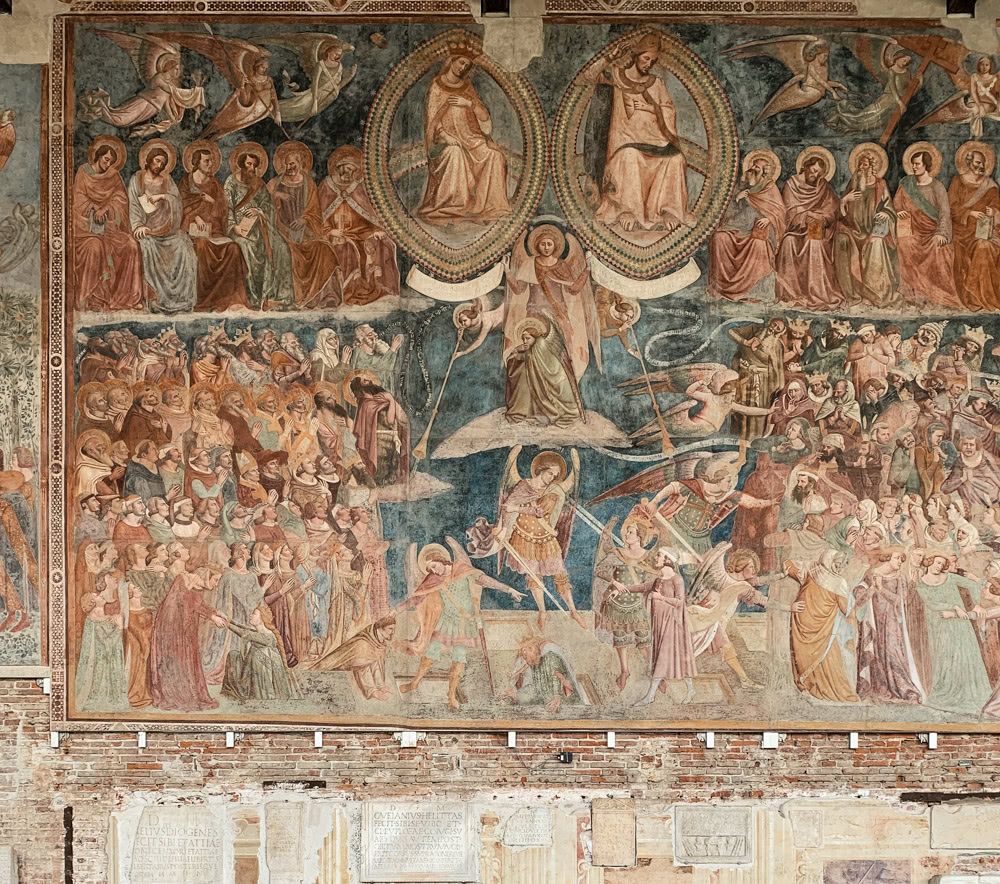 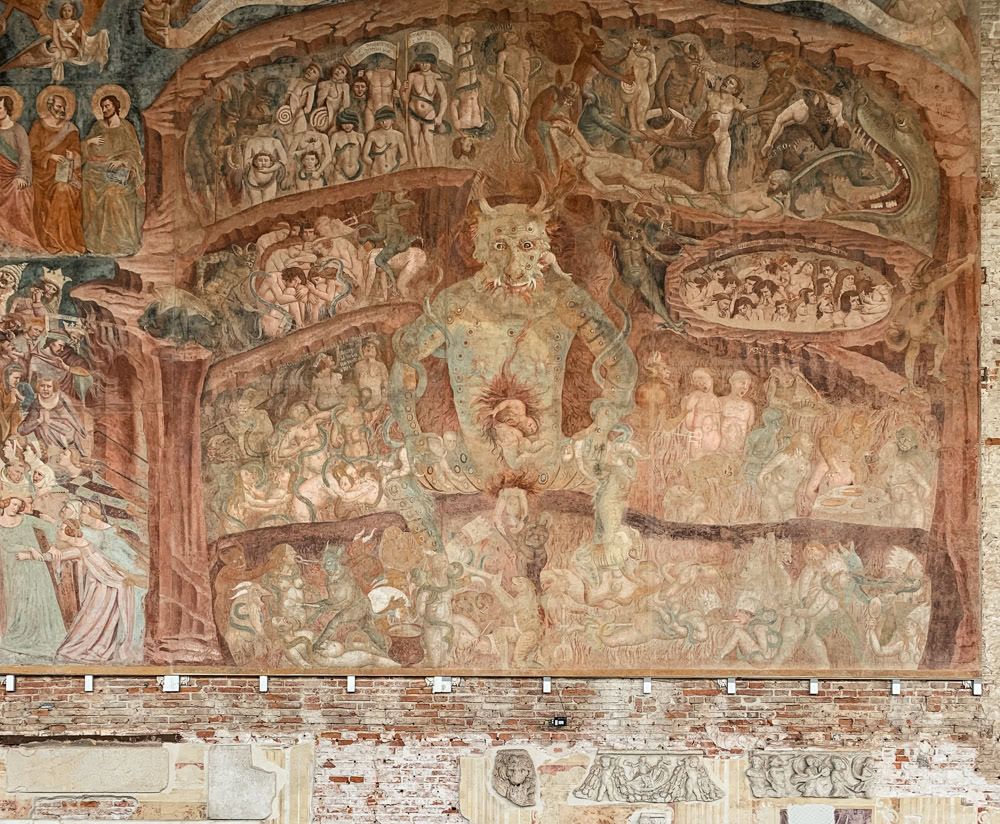 The room was lined with sarcophagi and bits of ancient masonry. The walls, just like the frescos above them, looked in dire need of a fresh coat of paint. 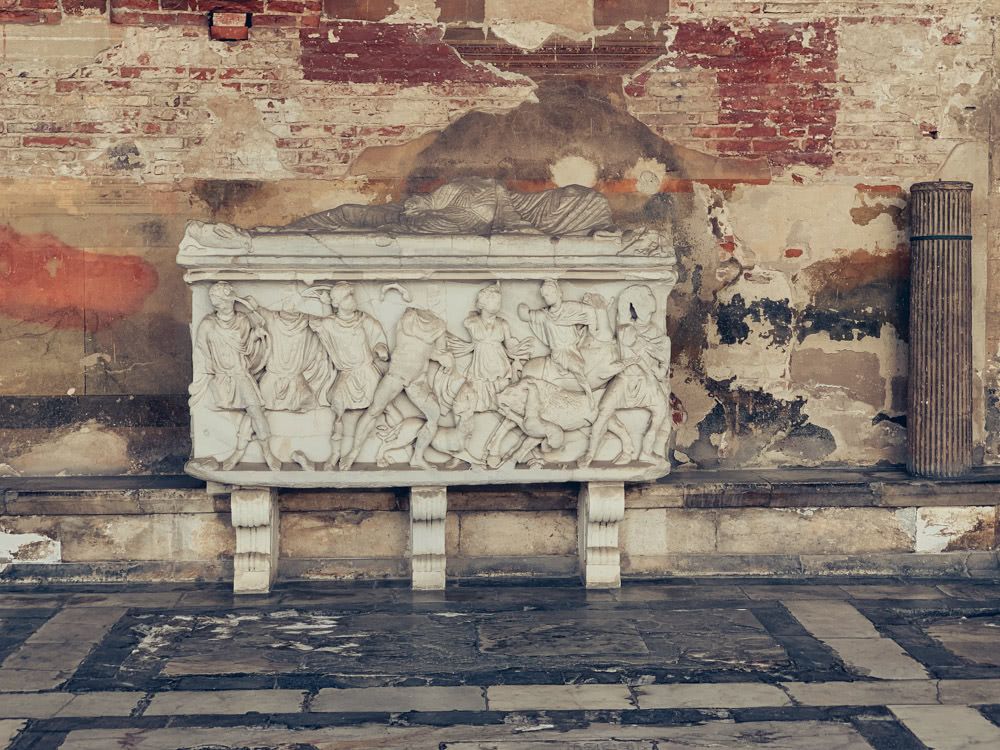 The Baptistry of St. John is an impressive cylindrical, domed structure with a marble facade and a delicately adorned entrance. Save for the bright stained glass windows, its interiors are relatively austere5. 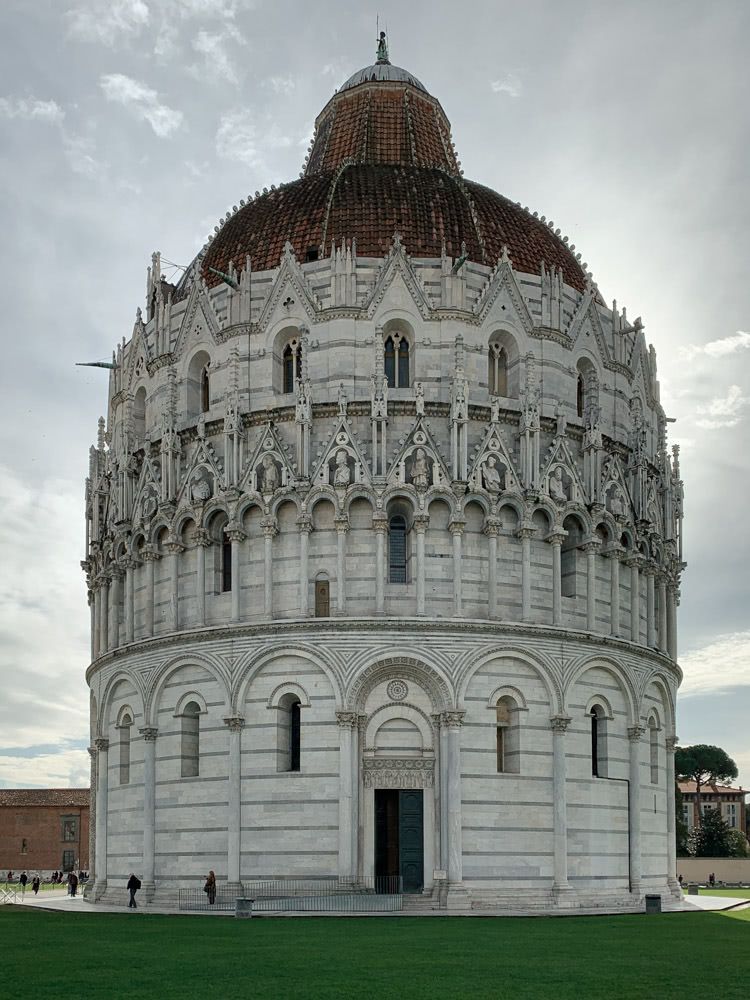 The Baptistry of St. John 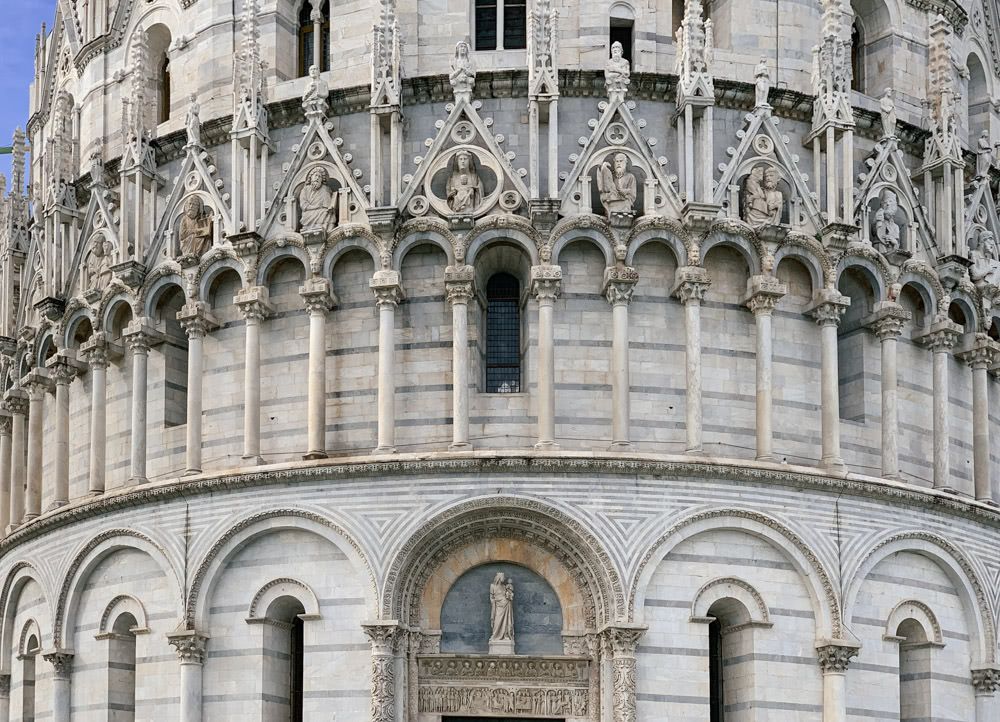 The Baptistry of St. John

The cathedral, like many hundreds of years old churches in Europe, is still in active service. The intricate, golden ceiling above the entrance glowed in the sunlight streaming in from windows carved into the upper levels of the cathedral. 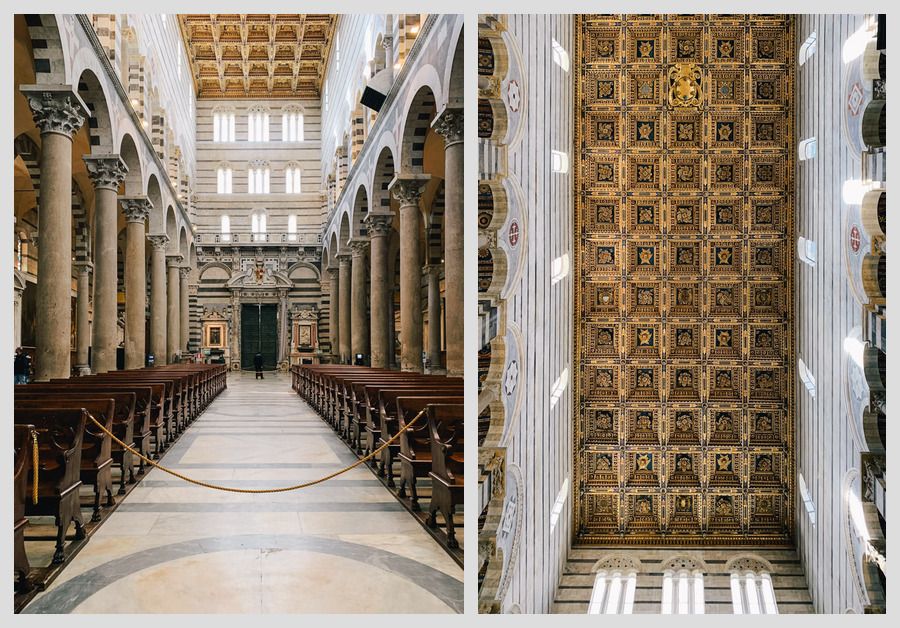 The wife drew my attention to the fact that the traditional tallow votive candles inside this church had been replaced with electric ones6. You’d put a coin into a slot, and a random candle (basically, a light bulb mounted on candle-length white rod) would come on. I failed to check the minimum denomination of the coin the slot would take.

We lunched at a small local pizzeria we had bookmarked on our way to the Leaning Tower of Pisa. They were also selling a crisp, savoury pancake of chickpea flour7, sandwiched between two slices of focaccia. We ordered a portion minus the focaccia. It was delicious.

We took another meandering route to the station. We came across a local cathedral, 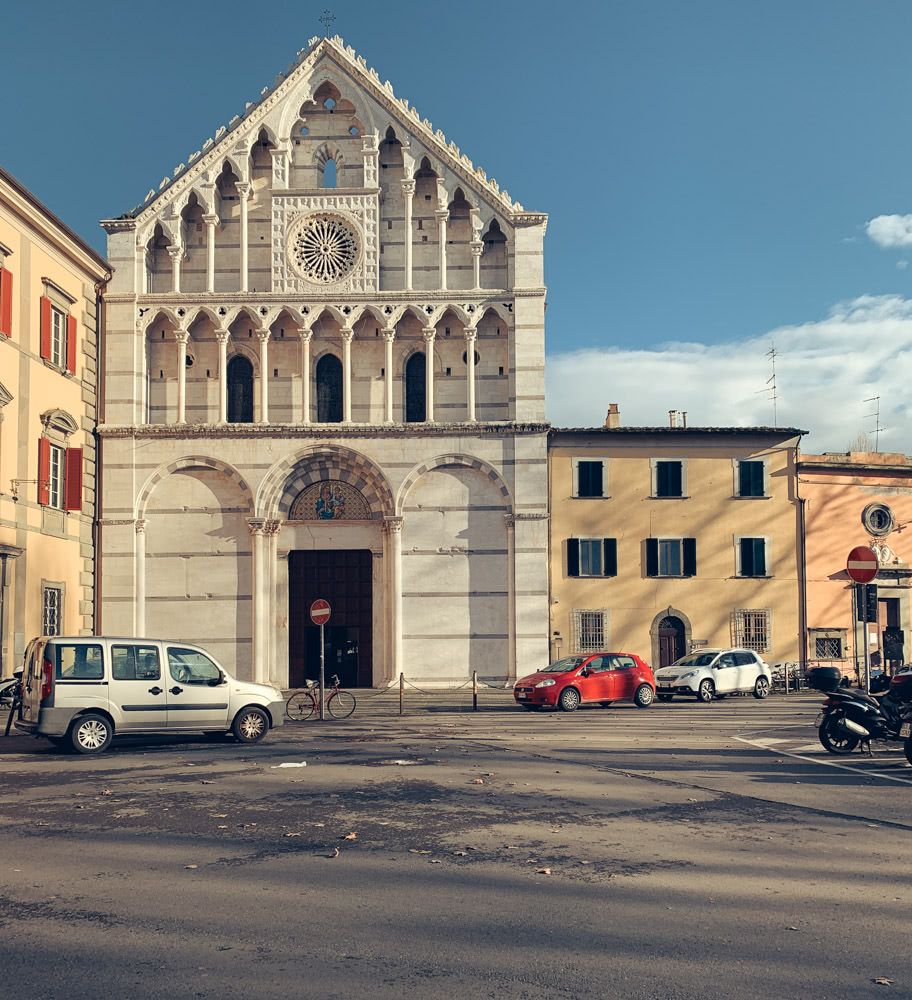 a park with a statue of Pietro Leopoldo I 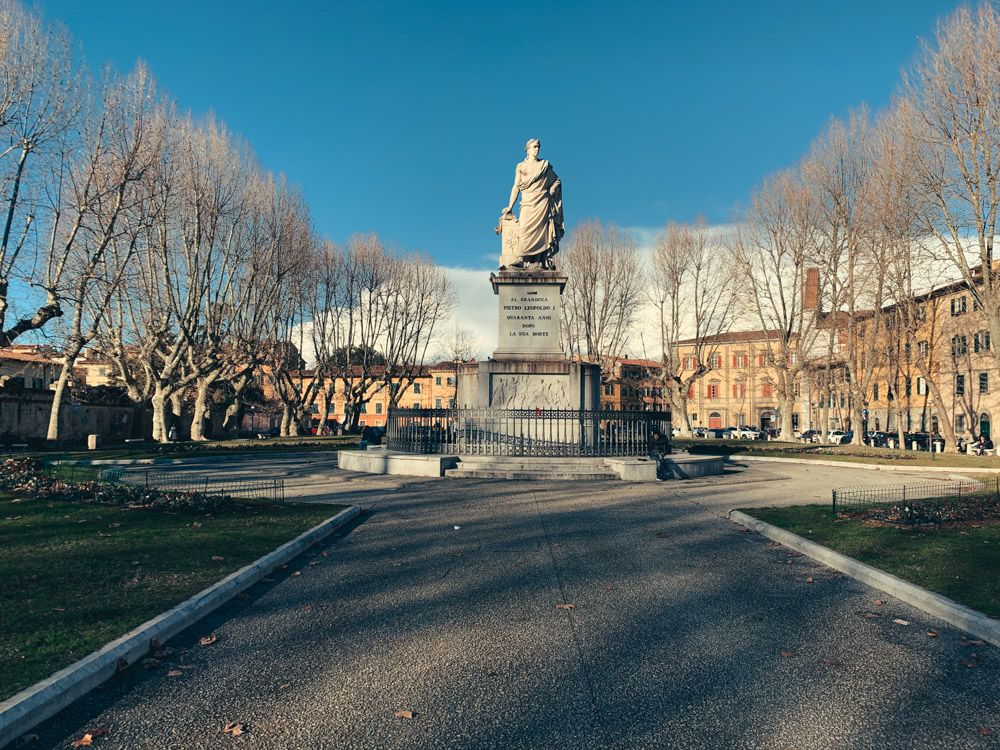 A park with a statue of Pietro Leopoldo I

and these gorgeous buildings at the campus of University of Pisa that looked surreal in the evening light.

We approached river Arno slightly west of where we were in the morning. This was fortuitous because we were able to visit the Santa Maria della Spina - a tiny gothic church with a beautiful marble facade8. 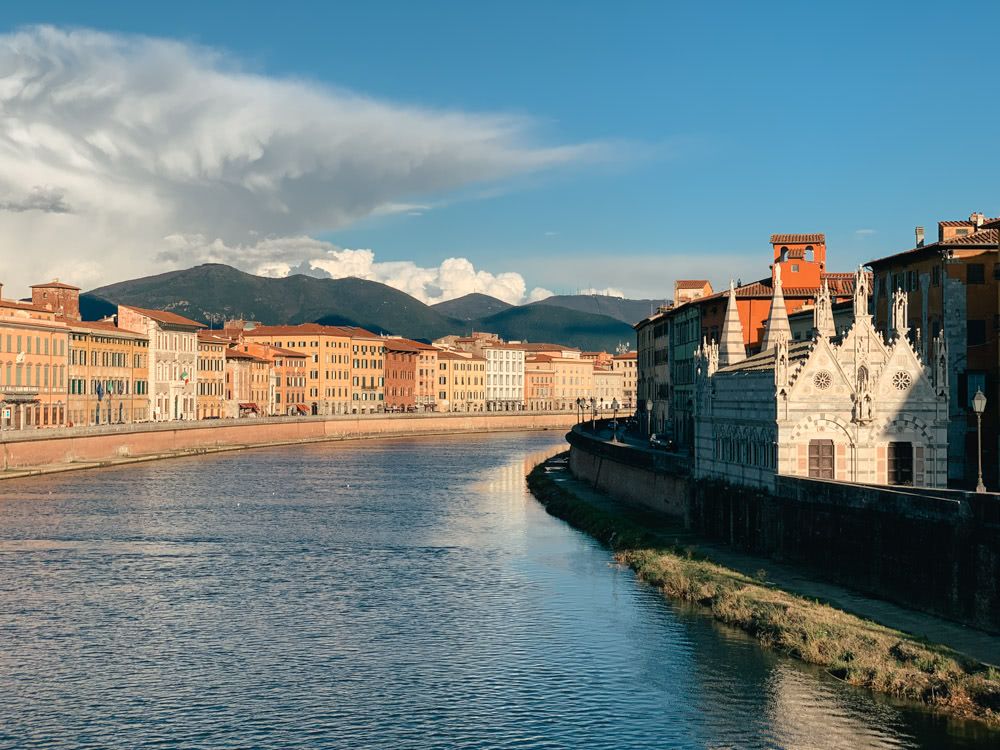 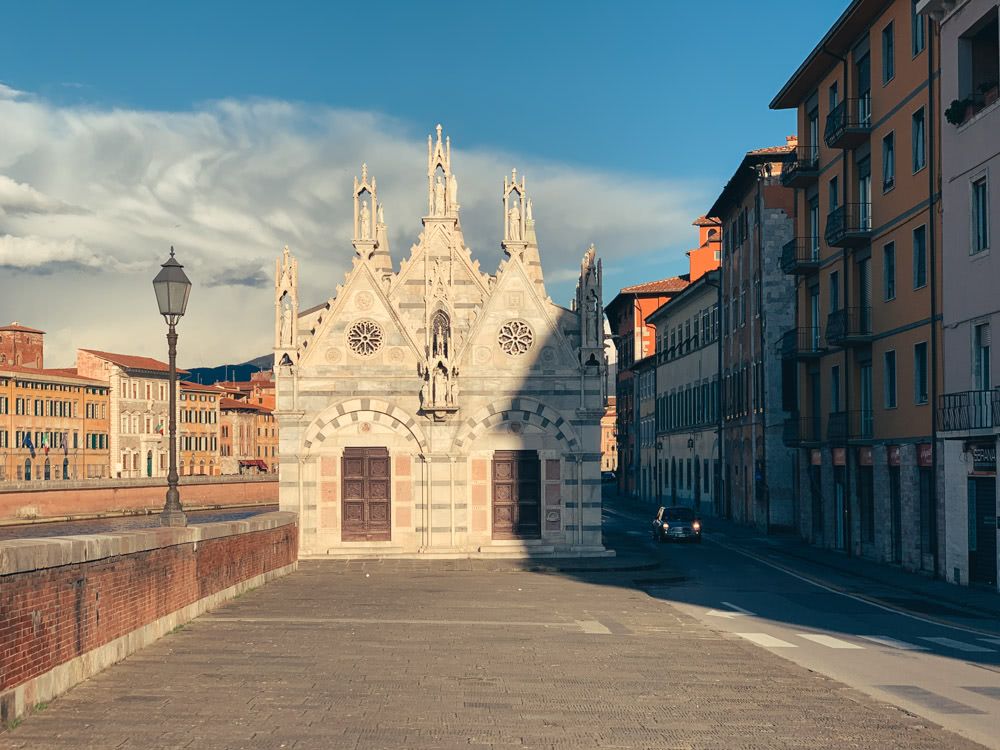 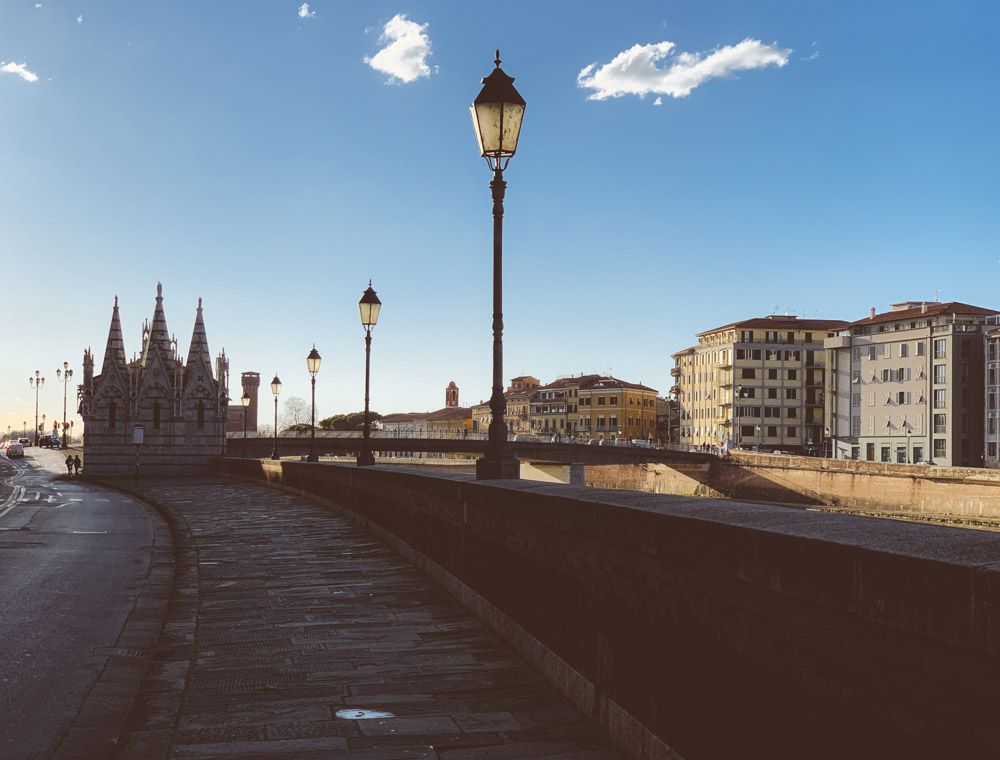 It was a lot windier now than in the morning, the river no longer a placid mirror. Sun was illuminating the buildings on the northern side and creating a breathtaking interplay between light, colours, shadow and contrast. 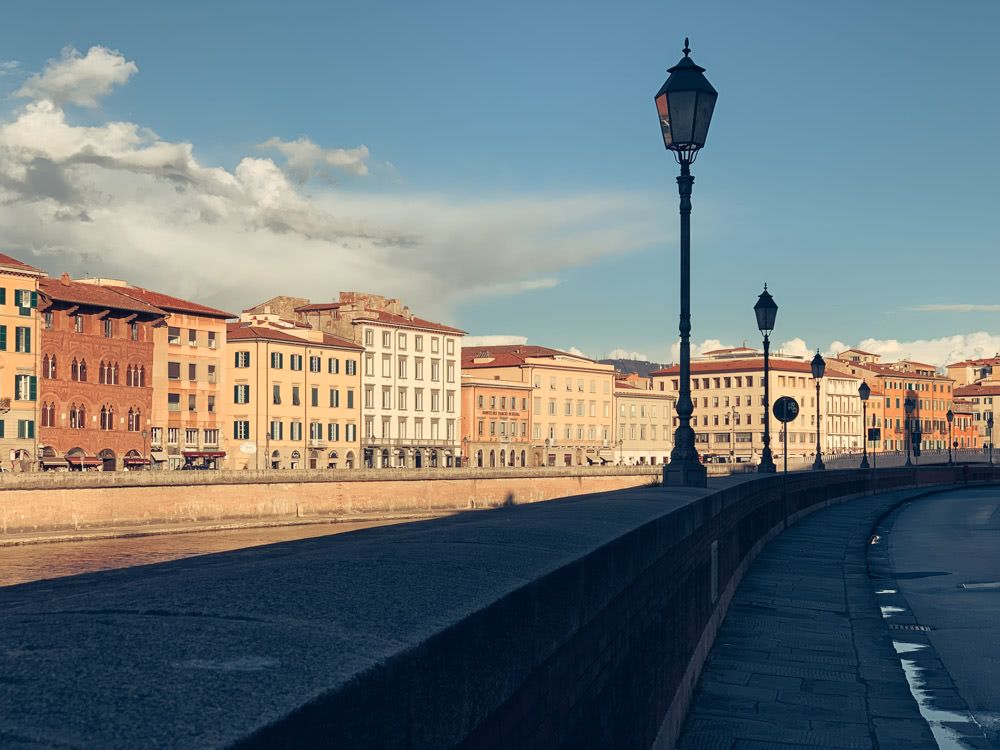 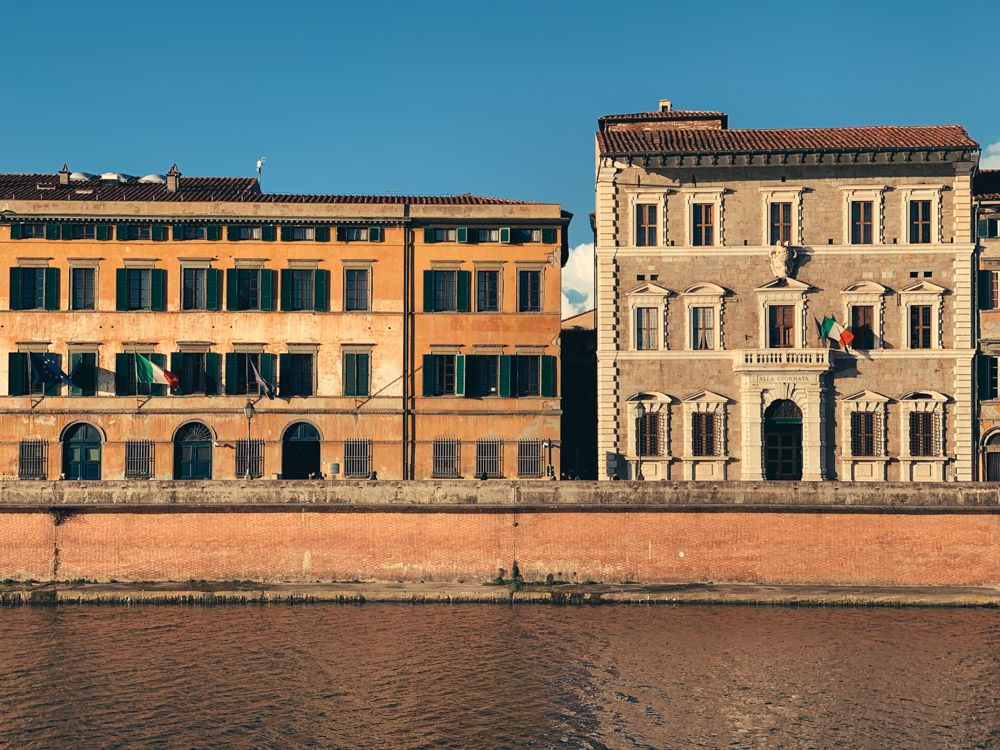 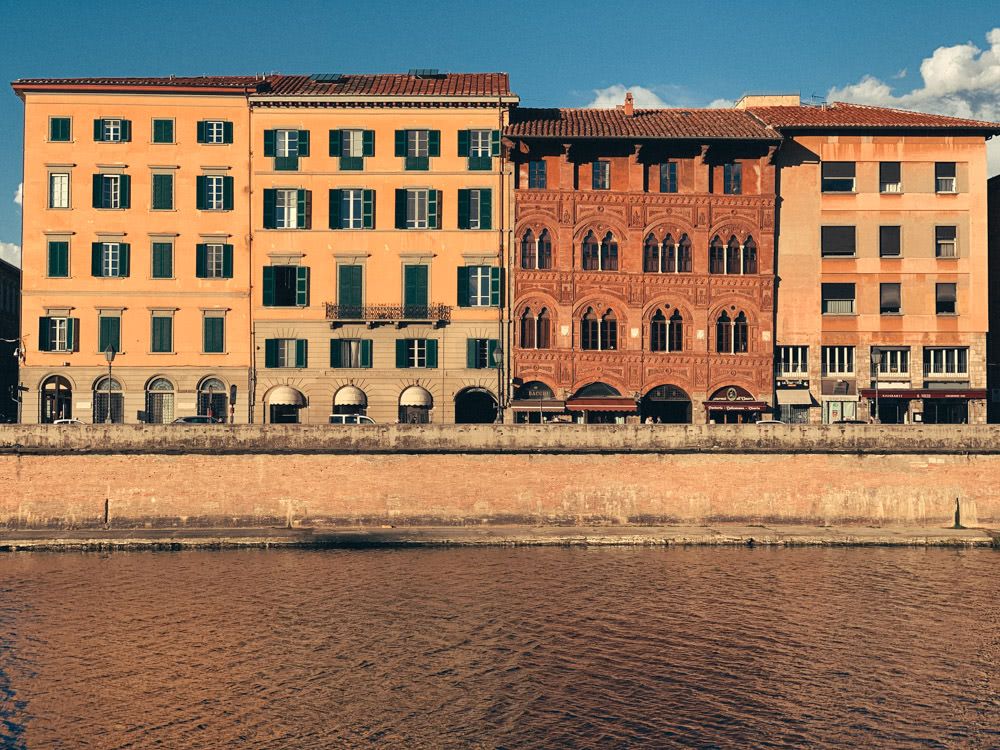 Another short walk through a quaint residential neighbourhood (complete with a merry-go-round) got us back to the Pisa station. 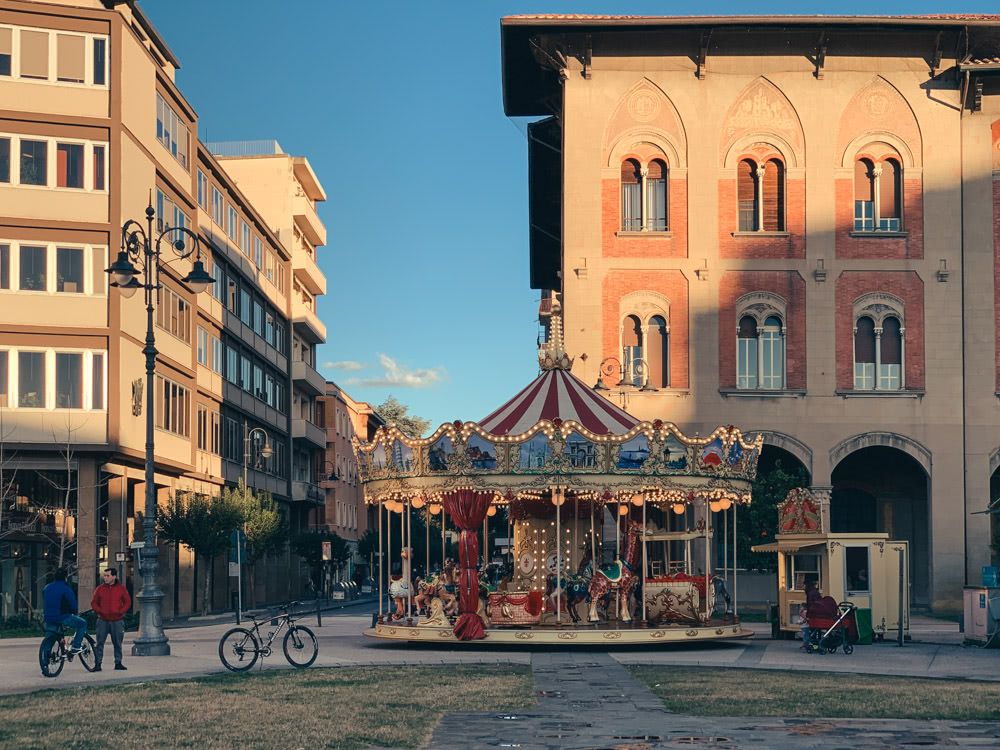 We almost got into the wrong train that would’ve taken over two hours to get us back to Florence. The right one was a few minutes later and, as it turned out, a few minutes late. After the kind of day we had had, we didn’t mind.

A visit to the Royal Botanical Garden of Madrid We were in Madrid last week. It’s a 2½ hour flight from Amsterdam. The wife and I mused that it’s the same duration as the Delhi-Bangalore flight

The bathroom drain The tiles around our bathroom drain are asymmetric: I am severely myopic but I don’t bathe with my glasses on. So even though the edges are