From Bergen to Flåm and back

The wife and I love train journeys. While planning for our trip to Bergen in Norway, the wife had read about how beautiful the train ride from Bergen to Oslo was. However, that would’ve been an 8-hour one-way trip and thus would’ve probably involved looking for an overnight accommodation in Oslo. Instead, we settled for a shorter 3½-hour train ride to Flåm.

On Sundays, the train leaves at a peculiar time: 9:59 AM. The train was mostly empty and naturally, we sought window seats in anticipation of picturesque views.

The views of placid lakes surrounded by pine trees and mountains that shortly followed our departure were stunning indeed. Given the mountainous landscape along this route, most of the track lies inside long tunnels bored through the mountains. The moment we would switch on our phone cameras, the train would roll into a long, dark tunnel. The noise of the engine would reverberate and would be joined by a strange whistling sounds as the air inside the tunnel would rush through gaps between our train compartment’s doors and their frames.

I lost myself in my book (Amitav Ghosh’s Sea of Poppies). I also had my headphones on, but given the din the train was making, had to strain to hear the music. I would occasionally raise my head from the book to take in the views as the train would transit between two tunnels.

The first half of our journey ended at Myrdal station. Here we walked to the platform across the tracks to board another train that would take us to Flåm. 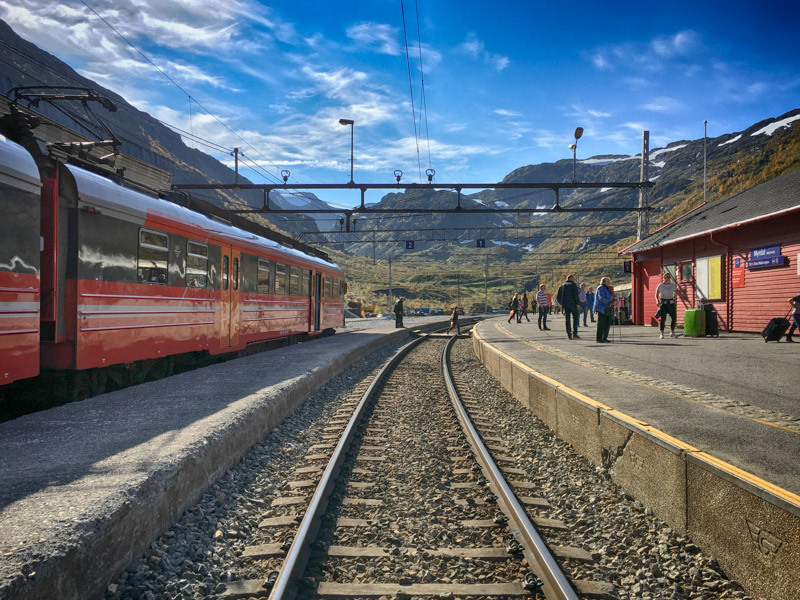 This train was quaint - with wooden benches and a decor that harkend back to the glory days of the steam engine. It was quite full and getting a window seat was out of question.

The train moved slowly and passed through more tunnels and over bridges that offered breathtaking views of the deep valleys below. It even made a 10-minute stop near a waterfall where everyone could get down and take pictures.

When we finally reached Flåm it was clear that it was a very popular tourist destination - a little too popular for our taste. We avoided the busy restaurants near the train station and grabbed a couple of cheese sandwiches and coffee for lunch from a small bakery. It was a clear afternoon and we sat down on a wooden platform by Flåm’s small harbor to enjoy our meal. We saw several boats leave from here for a tour of the fjords. Shortly a large ferry bound for Bergen docked here. Neither the wife nor I had particularly enjoyed the journey by train. The wife wondered if we would be allowed to use the ferry on our train tickets. I found the idea a little far-fetched but she decided to try it anyway. Turns out, it was possible in a somewhat roundabout way. We could cancel our train tickets for a fee of 100 NOK (approximately € 11) and by adding another 20 NOK or so to the amount we got back, buy the ferry tickets.

It was 90 minutes to the ferry’s departure and we killed time by taking a short walk through the village. Our plans to go see a church in the old village center were thwarted by the weather - it was too warm for a long walk without any trees shading the way. We returned early and stocked up on snacks from the bakery for the trip back.

When we entered the ferry a few minutes before the departure, the whole boat smelled of bacon. Clearly the pantry was well stocked for the 5 hour-long journey. The ferry was relatively empty when it started from Flåm, but it would pick up more passengers along the way.

Unlike the train, the boat was clearly not going to seek passage through tunnels. The entire journey was through Norway’s majestic fjords. We kept trying to take pictures by pressing our phone cameras to the grimy windowpanes of the ferry but when it stopped near a waterfall, we realised that the ferry’s upper deck was open to passengers. We found seats next to the staircase that led there and kept moving back and forth between the comfort of the warm, air-conditioned lower deck and the cold, open upper deck.

From a distance the cliffs surrounding the water looked like rocks covered in moss, but as the ship would draw closer, it would become evident that the rocks were bonafide mountains and the moss proper forests.

The ferry made a handful of stops near small towns and villages along the route. Some of those stops must’ve taken impossible feats of engineering to build: 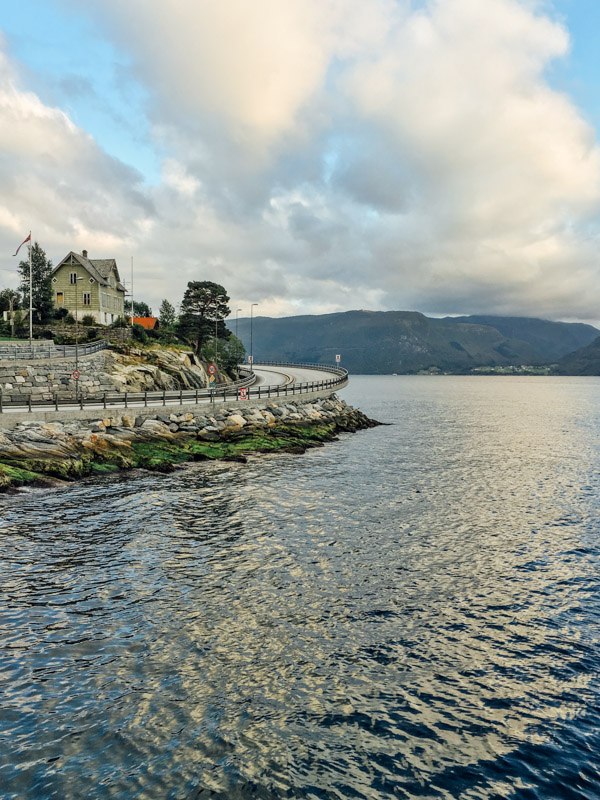 while others looked like scenes from a fantasy novel: 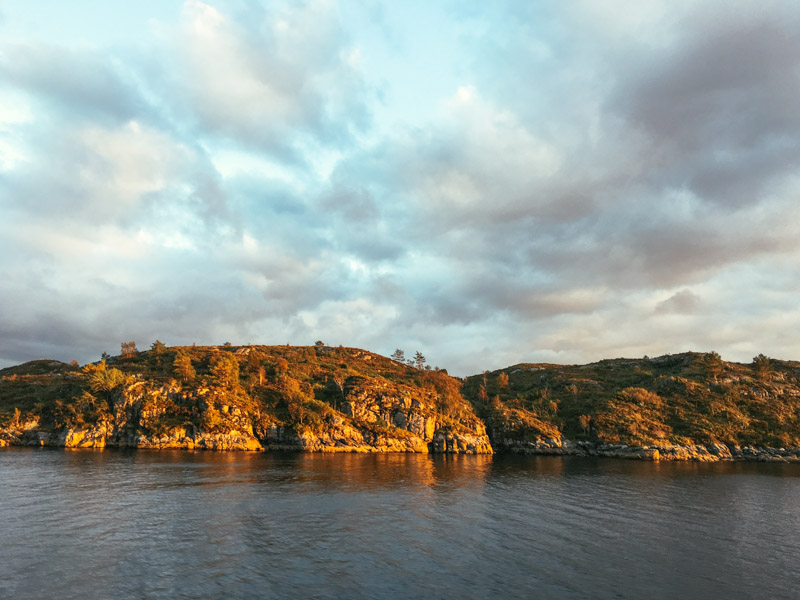 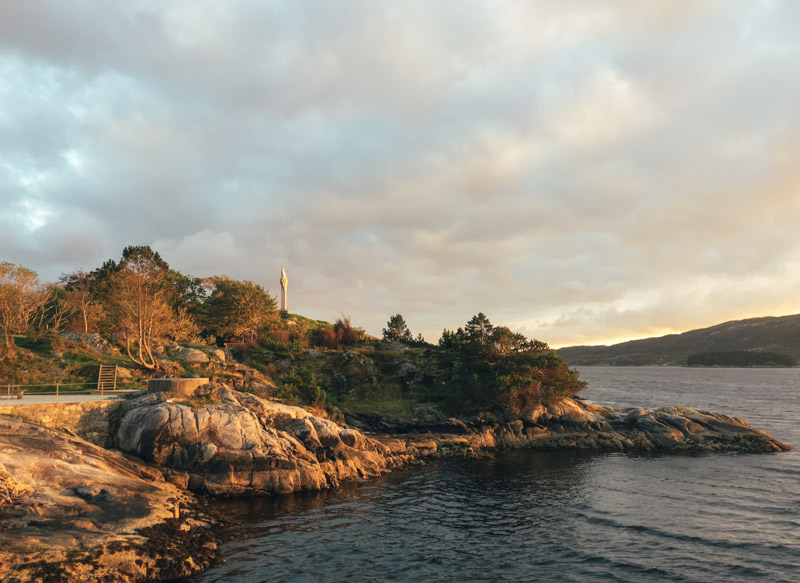 At this time of the year, the sun in Norway sets around 8:00 PM. Our ferry was leaving the fjords and entering open waters. The spray its bow raised as it zipped through the turbulent waters turned golden. The clouds that lingered in the sky, did so not with the intention of obscuring the sunset, but merely to add a bit a drama to the event.

Once the sun went down, we settled into our seats till the end of the journey. The ferry docked at the Bergen harbor (a short walk from the city center and our hotel) around 9:15 PM. We stepped out beaming - thoroughly pleased at our decision of having swapped the train ride for the journey by ferry. 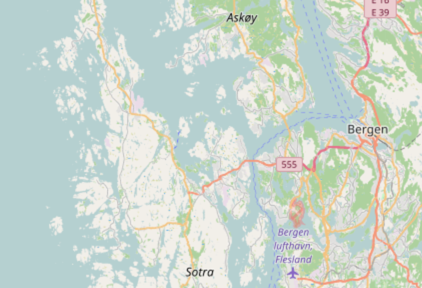 Welcome to my new blog! More content coming in a couple of weeks