If music be the…

[The events in this post took place on the 13th but I finished writing it today just as Azerbaijan were crowned the Eurovision song contest winners.]

In the elevator ran into someone who looked like a cross between Alfred Brendel and Woody Allen and had their combined age. I wondered if I’ll ever hear Brendel perform live (the concert page on his site is empty and the copyright date on the footer is 3 years old).

Decided to go home to drop my laptop backpack. Was missing those street musicians at Centraal just yesterday. Theres always the usual hubbub of people in a hurry at a busy station and theres trams ringing their “ding-ding-ding” bells, yet it had still felt eerily quiet without them. Seeing them today was life affirming. Smiled at the clarinetist and left them some pocket change. Must do it more often. On a vaguely related note, the tram bell always reminds me of The Beatles’ Penny Lane (seek to about 1:06 to figure why, or, listen to the extract below).

It was a mad dash to Concertgebouw. Presented my ticket outside the Great Hall where they were performing Mahler (lots of Mahler these days - his 100th death anniversary is on the 18th) and was politely pointed to the Kleine Zaal (Small Hall) where the String Quartet recital was. 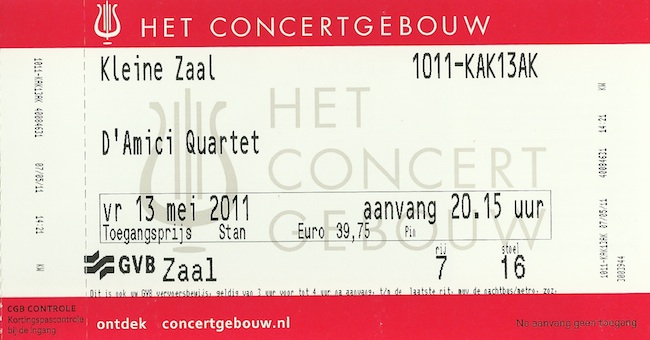 D’Amici started with Haydn’s Op. 77. I have a beautiful recording of this work by L’Archibudelli playing on period instruments. It sounds a lot different live.

They followed it up with the work that I was really here for - Beethoven’s last (well almost) String Quartet - Op. 135 and I wasn’t let down. I am no musician, but the 2nd movement of this quartet must be one of the most difficult thing to play in the entire String Quartet repertoire. During the 1st movement, tears were rolling down my eyes, but during the 2nd, I wanted to get up and dance.

During the break I tried to memorize the names of all the composers on the plaques above each door (to my left Bach, then Haydn, followed by Beethoven (that’s where the musicians sat), Mozart, the two Schus- Schuman and Schubert spelt in the classical form Schvbert, Schvmann). A brilliant performance of Debussy’s String Quartet in G-minor ended with a long, rapturous applause. D’Amici returned it with an encore. The first violinist whispered ‘some more Haydn’ to the crowd and the quartet played the last moment of Haydn’s ‘The Joke’ quartet.

There’s a technically detailed explanation on Wikipedia to let you in on the joke but in brief (hear hear):

The movement begins with a lively theme. As it nears completion theres a short pause and then it resumes again. This goes on till the pauses become so long that the audience begins to wonder if the piece has finished already. But no it hasn’t and the quartet begins playing again. This happens a few times till everyone is chuckling.

I found the choice of works by D’Amici for this recital interesting. Each work here is the last completed String Quartet by the respective composer and each one is considered a bridge on to the next one. I wonder what it must feel like to have roughly 100 years of music (Haydn’s Op. 77: 1799, Beethoven’s Op. 135: 1826, Debussy’s Op. 10: 1893) placed before your eyes. I sure feel lucky to be able to listen to hundreds of years of musical evolution in one sitting.

Came out sporting a cheek-to-cheek smile to my wife waiting patiently outside and we went for an Italian dinner. I told her on the way about how badly I had wanted to hire a String Quartet for our wedding. Better sense prevailed, but I did manage to sneak in the first movement from The Joke on the CD that played at our wedding.

I also kept gushing about how beautiful it is to see a String Quartet perform. There is this anecdote about Cleveland Quartet (disbanded in 1995 so theres no way I am getting to see them live), where they were once presented with a “cuddly velvet Octopus” named Mr. Cleveland by a little girl. Her reasoning was immaculate - a String Quartet is like an Octopus - “one head, one heart and eight hands that work together perfectly”. The wife, I am sure now, refuses to believe that a String Quartet is a beautiful thing to see. That we spotted the following on our table mat while battling our thin-crust pizza at the Italian restaurant won’t help my cause: 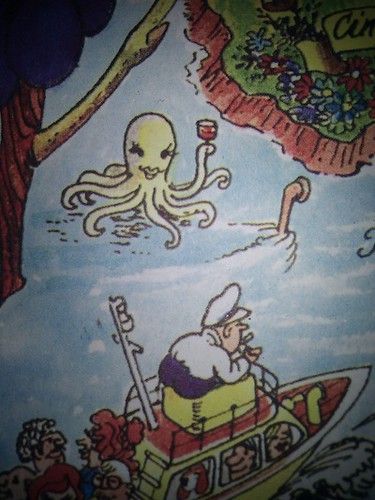 The Book Fair at Dam Square We were at the second-had book fair at the Dam Square today. While English was rather poorly represented, it didn’t stop us from spending time in

Rough Draft: On Letting Go One of the hardest things I did before moving to Amsterdam was to give away my collection of 500 odd audio CDs - painstakingly curated over a period