Listening to the soundtrack of Tezaab after 25+ years

I grew up in Delhi at a time where there were only two TV channels. They would broadcast government sanctioned programing for limited hours in the evening. There were segments that dispensed advice on agriculture, some news, a little light music and drama serials. That made movies really special.

Marketing movies must’ve been difficult back then. You had two main marketing channels - radio and newspapers. That said, our attention was not as scarce as it is today. If you could somehow reach us, your message stood a higher chance of sticking. Also, if you had the budget, you could repeat your message ad-nauseum on the radio - as evidenced by tens of ad jingles from my childhood that I can still recall.

I don’t remember seeing movie adverts on TV back then. We did have a program that broadcast songs from movies (Chitrahaar). I guess that’s probably one of the reasons songs have been such an integral part of Bollywood movies - they was also a marketing vehicle. They’d even place small promotional clips about an upcoming movie at the end of each side of audio cassettes. 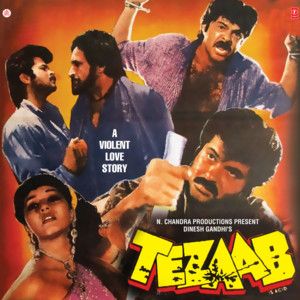 When Tezaab came in 1988, A. R. Rahman was still 4 years away. The acoustic landscape in North India was dominated by lilting voices backed by expansive orchestral theme pieces, dholaks, acoustic guitar and bits of synthesizers, composed mostly by musicians that only seemed to be able to work in pairs (Laxmikant-Pyarelaal, Kalyanji-Aaanandji, Nadeem-Shravan, Jatin-Lalit).

The music of Tezaab must’ve become a hit before the movie did.

Music was not something my family actively engaged with - it was merely the background soundtrack to which we’d get ready for school or partake of oranges on the house’s rooftop on lazy Sunday winter afternoons. That changed when my aunt gifted me my first walkman. Listening to music for the first time in stereo over headphones remains one the biggest transformative experiences of my life. When played on the walkman, the dusty audio cassette library of my parents metamorphosed into something entirely new altogether. I must’ve picked up the cassette of Tezaab then, quite possibly a few years after its release.

While I found the main track (Ek Do Teen Chaar)1 of Tezaab too loud, a couple of tracks from the movie (Jeena Nahi, So Gaya) must’ve made an impression. I was (and to some extent am) bit of a musical snob. To think that I found something worthwhile in a mainstream Bollywood soundtrack composed by Laximant-Pyarelaal must have been an unpalatable thought for me to hold in my mind back then - let alone admit it loudly to someone. Anyway, the tracks stayed lodged in some obscure corner of my mind but I hadn’t heard the music of Tezaab for what, 25 years at least?

I play with Garageband from time to time. It’s my acoustic equivalent of adult mandala colouring books. After not having touched it for five years or so, I started it again on my phone - probably egged on by the tutorial about making music that Ableton recently released on their website. While I was arranging the loops into something resembling a musical piece, Jeena Nahi, suddenly came back to me very clearly deconstructed into its constituent tracks - just like a fully formed Garageband project.

Especially the synth intro of the song:

and the first interlude:

When you pay close attention you also notice how many motifs are repeated and would make for perfect loops. Here are three examples from the first three or so minutes of the close to eight minute long song.

Trying to make music on Garageband has given me a new-found appreciation for all the hard work that went into recording and putting a song together in that era of analog tapes.2

p.s. The first couplet of Jeena Nahin is:

which roughly translates to:

say that you are mine
or else I want to die

The wife wanted to look up the lyrics online and one of the first results she came acorss was an obituary of someone called Mary Verna.

p.p.s. The song that follows Jeena Nahin is Tumko Hum Dilbar Kyon Maane - musically and lyrically entirely forgettable - one those cassette fillers that was probably written, composed and recorded in a day. The realisation that there were people mentioned in that song that seemed mythical growing up but were now all dead (Phoolan Devi, Sri Devi, Dara Singh) made me a little sad. A friend shared this nuggent on Facebook:

Trivia: the song “Tumko Hum Dilbar Kyon Maane” was remarkable in that it was added after the movie was released in theatres. They actually put up a second round of posters proclaiming “New Song!”.

p.p.p.s. A word about the movie itself: the byline on the poster reads: “A violent love story” - which basically means GrindHouse cinema with catchy Bollywood songs thrown in. So given the theme of the movie the parents wouldn’t have been too keen for me and my sister to watch it. Forbidden fruit is tastier, but this is the 80s so no computers, video CDs or DVDs, no internet and thus no bit-torrenting either - in short, no other means for a timid, school-going teenager to procure the said forbidden fruit. I don’t recall watching Tezaab, but if we did it would’ve been under parental supervision with my mother on the ready to fast-forward scenes that might’ve been deemed too racy or violent for us.