We walked through the warren of narrow streets in the old town in search of a place that’d serve us breakfast. Along the way we encountered several houses that were being repaired or renovated. It must take special skill to manoeuvre heavy construction equipment into these streets.

As someone who grew up in a crowded neighbourhood in a middle-class part of Delhi, the narrow streets were at once oddly familiar and completely alien. There were hardly any people around and nor were there any children playing street cricket.

After breakfast, we queued up outside Real Alcázar de Sevilla. The queue moved at a moderate pace and some 30 minutes later led us into a poorly lit room with ticket counters. Before we could buy the tickets, our bags had to go through an x-ray machine - much like the ones at airports.

Real Alcázar is complex of several buildings built over several centuries (between 11th and 16th) in the Moorish style. Some of these used to be administrative offices, others were living quarters of the royalty. Their walls were covered in colourful ceramic tiles while their arched entrances and roofs were covered in intricate floral and geometric patterns carved in plaster1. 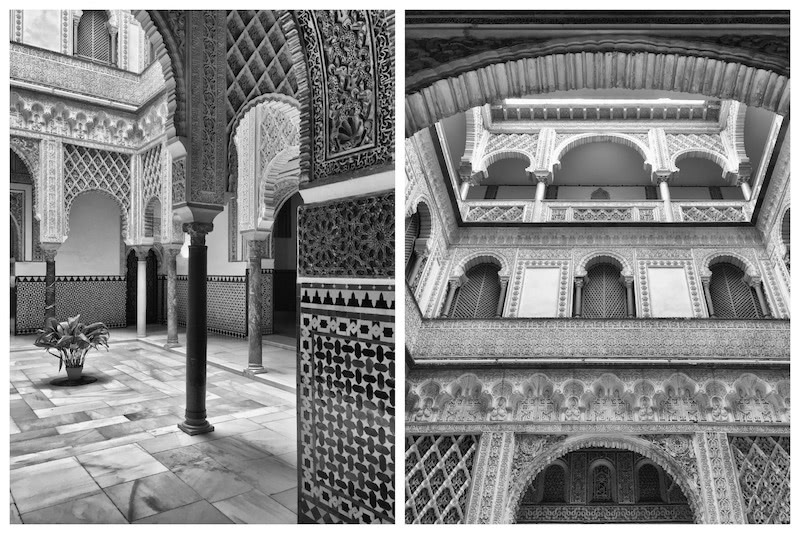 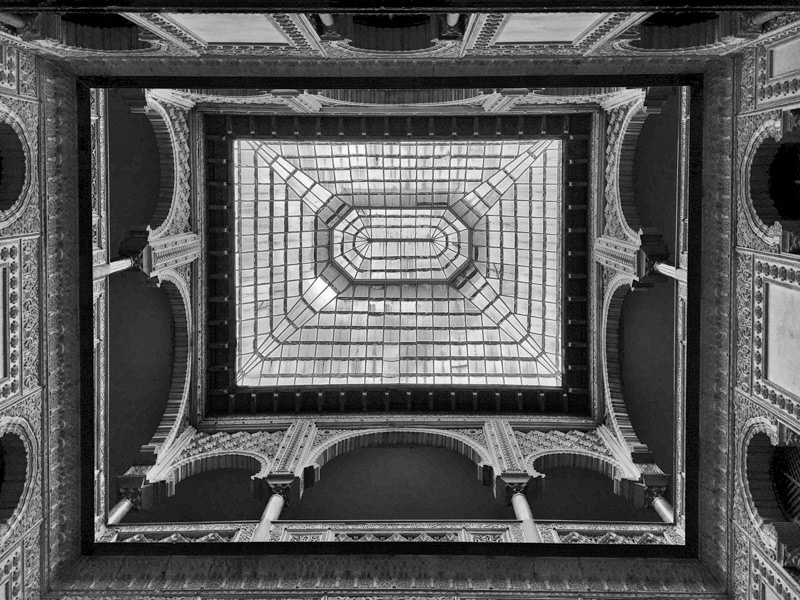 The palace complex was also dotted with several gardens where countless orange trees were decked in, well, oranges2. In one garden, peahens and peacocks roamed freely. 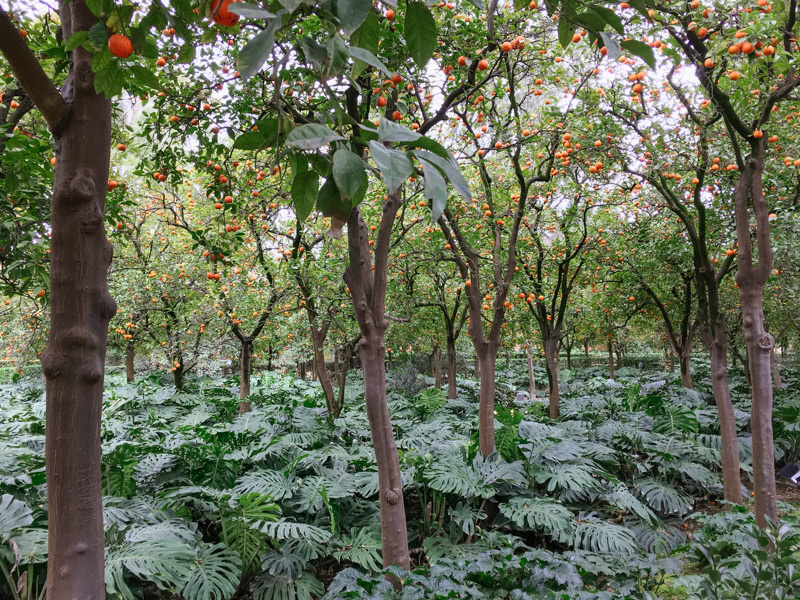 The complex even had a bathhouse. 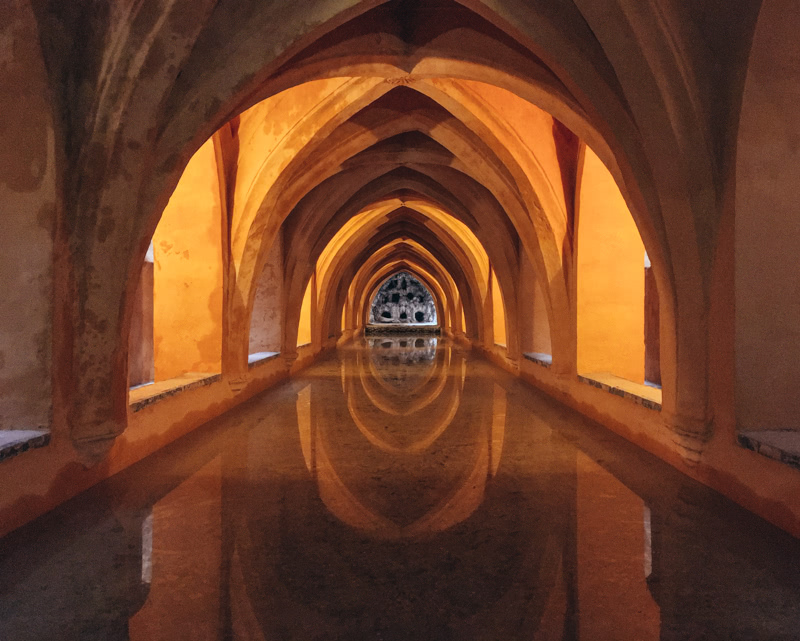 After spending a few hours hopping from building to building, we stepped out in search for the next landmark on our list - Plaza de España. Despite the offline map on our phone, we managed to lose our way. We were still in the historical center so we simply enjoyed the views till we managed to put ourselves back on track. 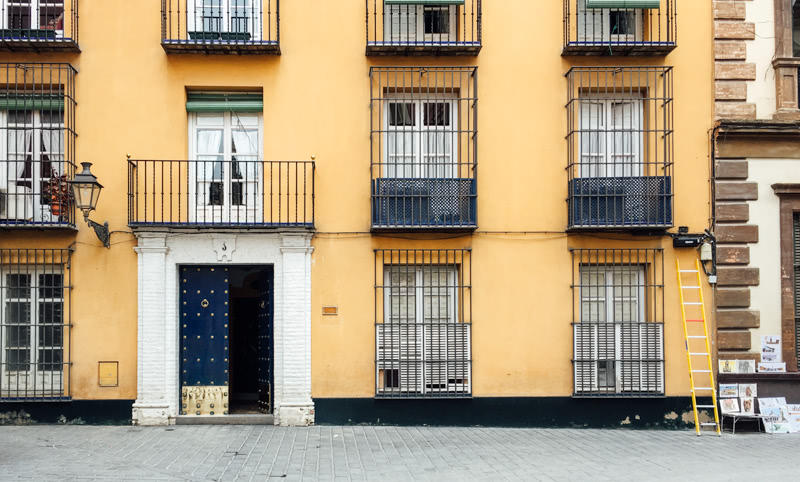 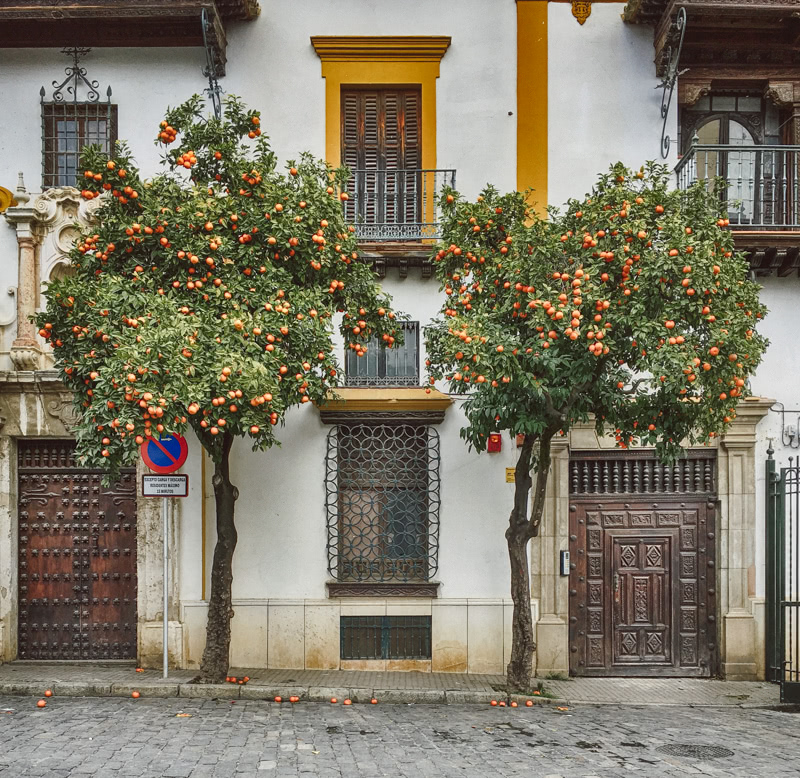 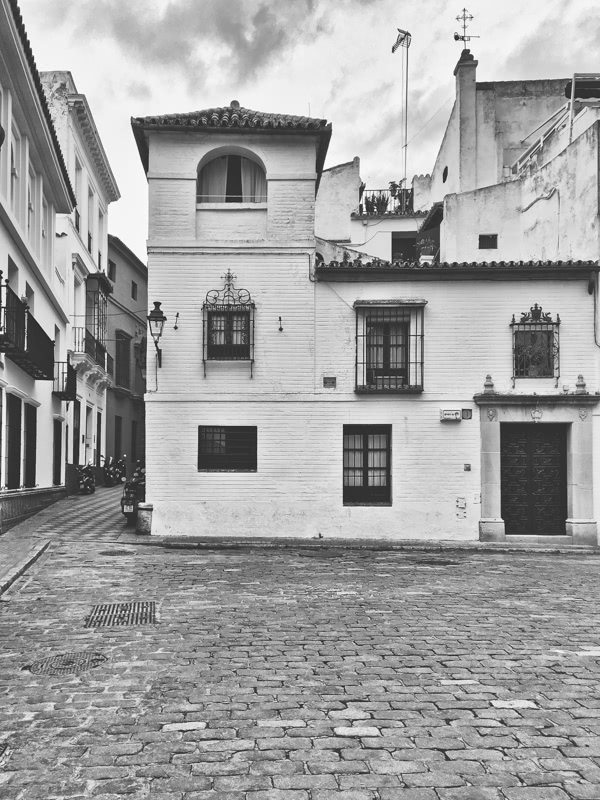 No amount of seeing pictures of Plaza de España on the Internet prepares you for its grandeur in real life. The building dates back to early 20th century and was built for the 1929 Ibireo-American exposition - a product of the same 19th century tradition of World’s Fairs and Expositions that gave us the Eiffel Tower. The building is semi-circular and is flanked by two impressive 74-meter high towers on either sides. 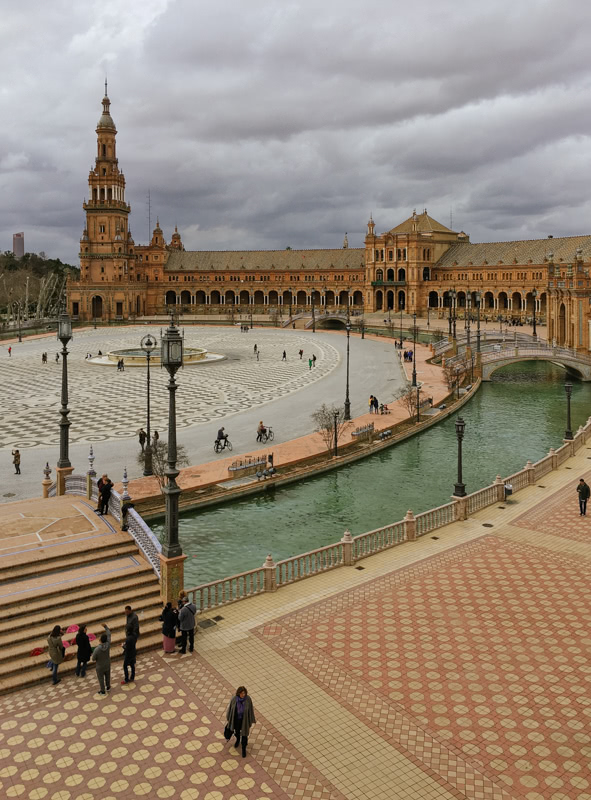 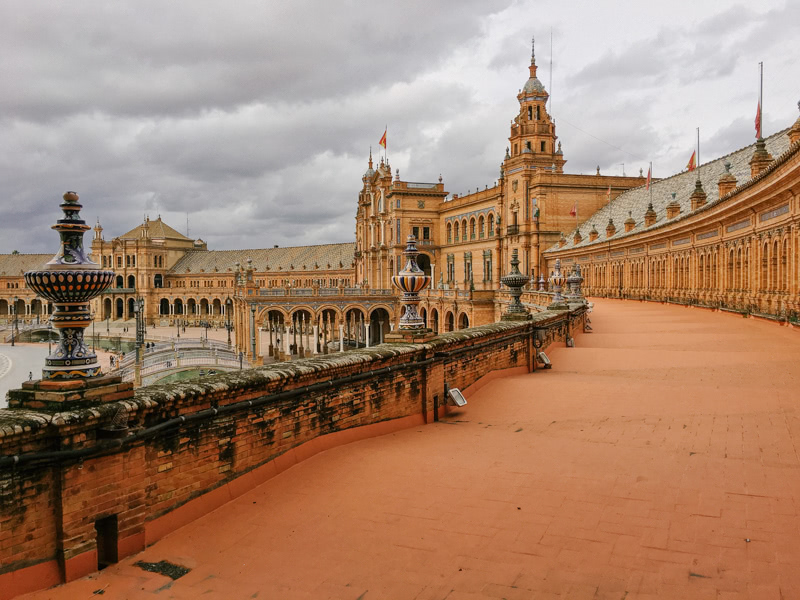 It is separated from a huge D-shaped courtyard in front by a moat. You can rent a small rowboat and go around in the moat. Several graceful, arched bridges with ceramic balustrades3 connect the courtyard to the building. 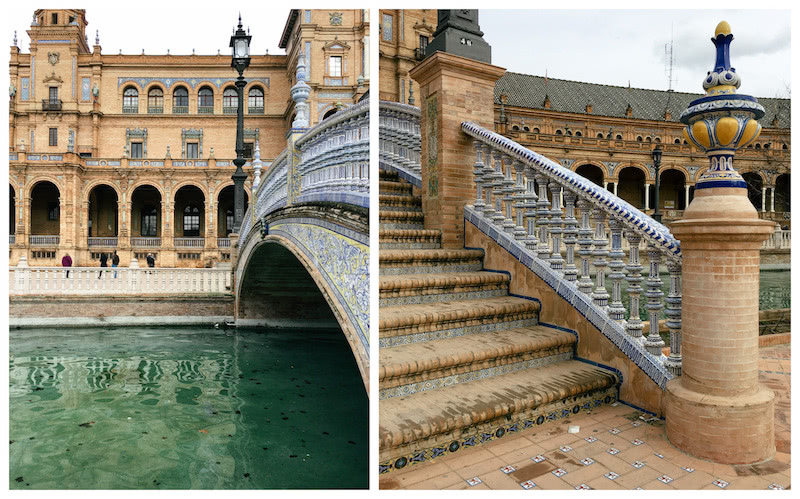 The sound of vendors selling castanets echoed through the building’s corridor regularly and kept reminding of not a piece of Flamenco music but of this Italian baroque aria:

As we were leaving, we spotted a Nikon DSLR lying on a bench in the courtyard. There is no entrance ticket to Plaza de Esnpaña as it’s basically a very grand public space that happens to be a tourist attraction. So there weren’t any ticket counters or officious looking liveried people that we could entrust the camera to. While we stood there wondering what to do, a middle aged lady with a worried look on her face came running to the bench. The moment she spotted the camera lying there, her concern turned into a big smile. She picked the camera and thanked us profusely. I felt a twinge of guilt for getting so genuinely thanked for our mere indecision.

After dinner we spent the evening walking through the main tourist/shopping district. 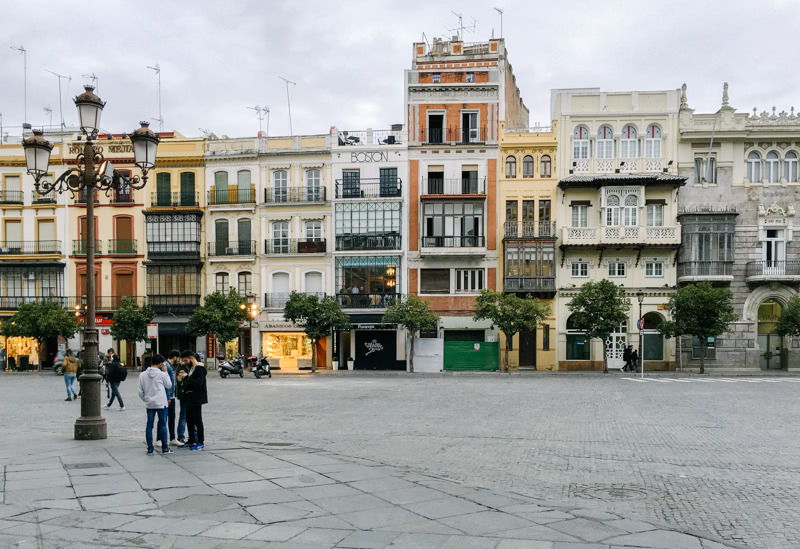 I was mildly amused by these ads outside a branch of Bankia Bank that pomised mortgages no matter how crazy your dream house was: 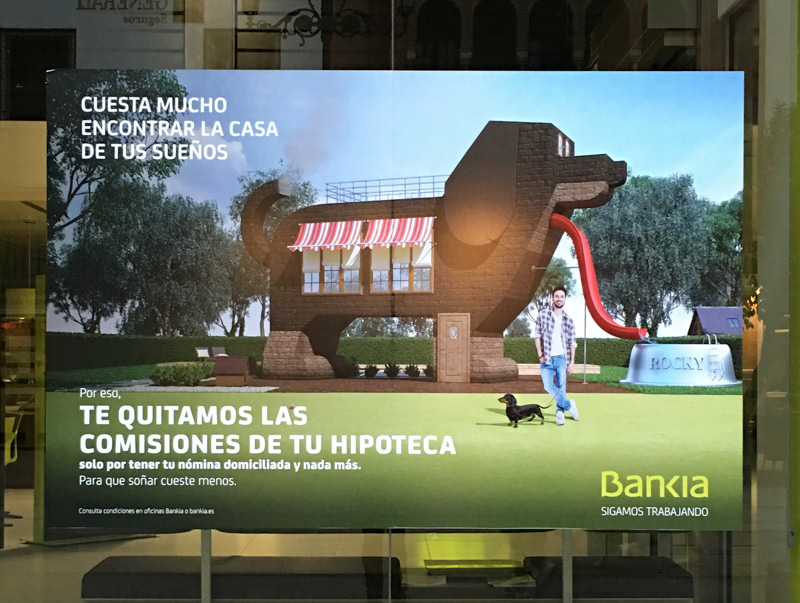 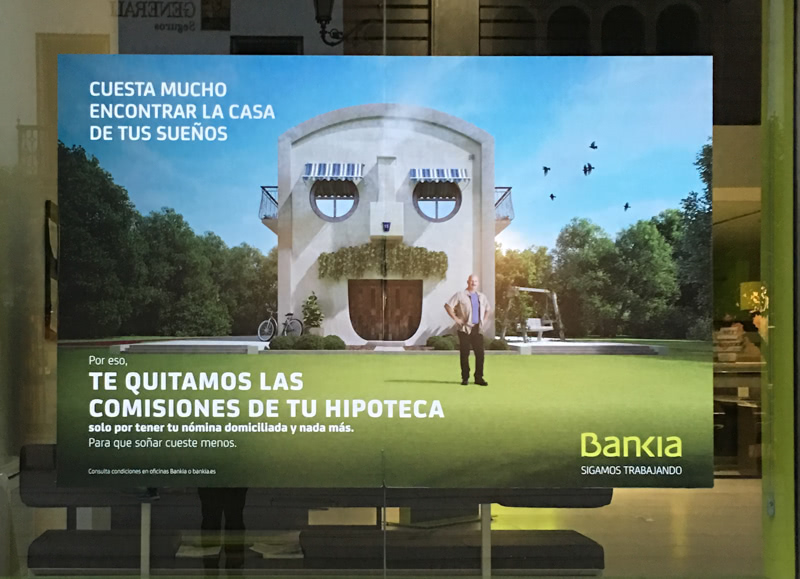 Thankfully, by the time we reached our apartment, I was too tired to dream up or of any crazy houses.

Rainbow over Brouwersgracht April doet wat hij wil - April does what it wants - goes the Dutch saying about tempramental April weather. A few days ago I was walking to work on