My first visit to Hong Kong in the year 2000 had left quite an impression on me. I was there again last year. Visiting a country after seventeen years is practically like going to a new country. In the end, I was surprised as much by what had not changed as by what had.

Here are some memories from my first trip in 2000 contrasted with impressions from the one in 2017.

The trip in 2000 was a business trip1. In addition to paperwork the Hong Kong office had mailed me to help me clear immigration, they had sent the name and address of the hotel in Chinese. And I am glad they did because a printed copy of it had come in handy with the cab. This time I had everything on my smartphone but it wasn’t even needed - our driver spoke and understood English and knew how to get to the hotel.

Thinking back about all my travel anxiety in 2000, I am struck by how difficult it is now for me to even imagine that world without smartphones, Google Translate, online maps and Uber.

Hong Kong’s metro had been quite a revelation. Back then, Delhi metro was still a pipe dream. Overcrowded DTC2 and Red Line3 buses stuttering through chaotic Delhi traffic had been my only experience with public transport. To see fast, efficient, air-conditioned public transport that was the Hong Kong metro, had felt like traveling into the future.

After all these years of having used metro in multiple cities across the world, Hong Kong metro still feels impressive for its speed and efficiency. I was delighted to know that their public transport card is still called the Octopus Card4. Even the announcement in Cantonese telling us to mind the gap hadn’t changed one bit. Although, they have now added announcements in Mandarin too.

This time we also used the Kowloon ferry. The view of the harbour skyline at sunset from the ferry was quite stunning. 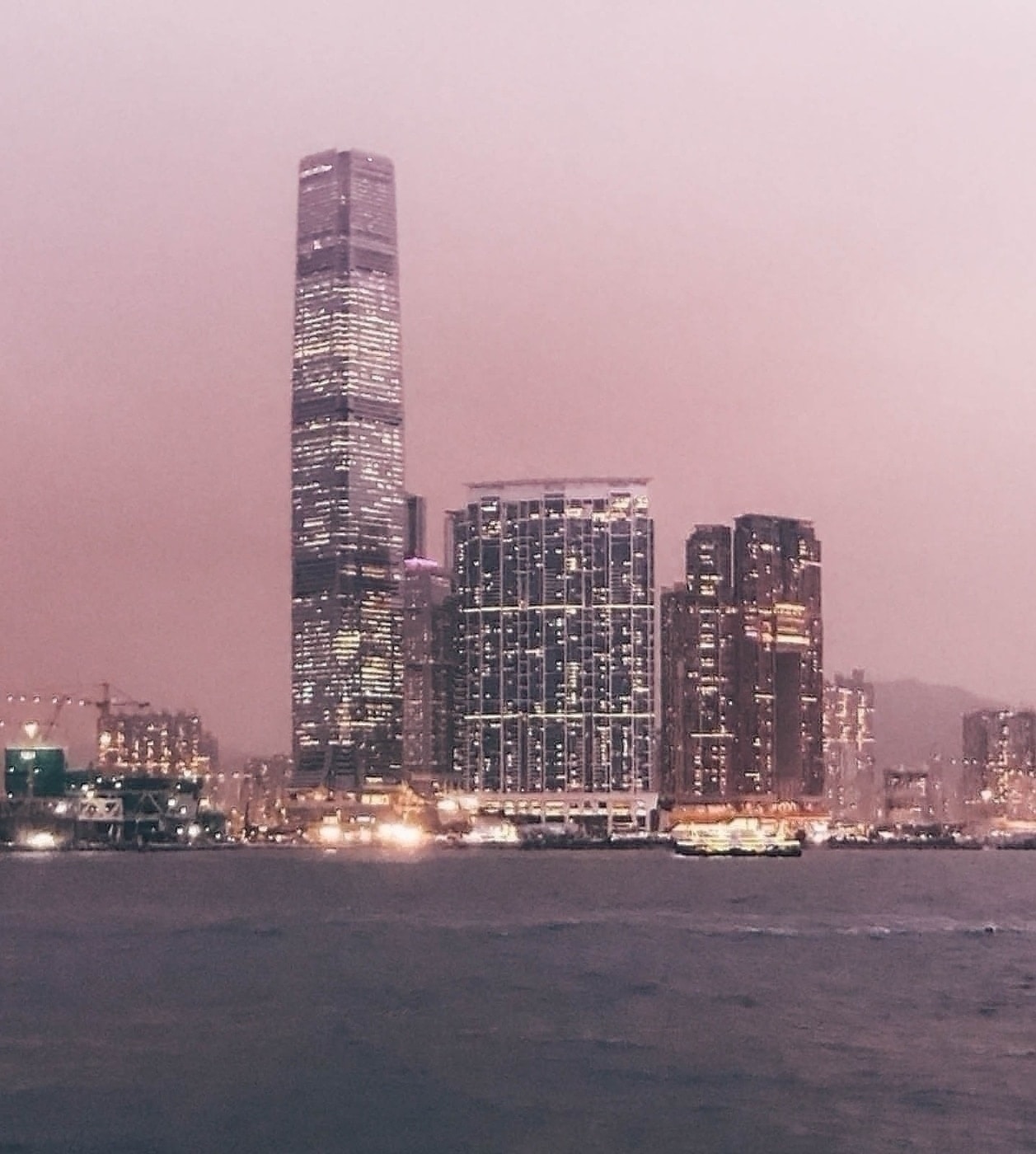 View from the Kowloon Ferry

My first visit to Hong Kong had been in August. The weather during that trip was hot and muggy and I distinctly remember being wowed by strong gusts of cold air-conditioned air escaping through the shops at Tsim Sha Tsui each time their doors would slide open.

This time we were flying in December after a week in Singapore - which, even in December, is hot and muggy. Since Hong Kong and Singapore are in the exact same time-zone, we presumed that they’d also be the same weather. Hong Kong in December is anything but. The evenings were a nippy 9ºC and the strong winds made it feel a lot colder. Eventually; and in hindsight a couple of days later than we should have, we pulled out our Amsterdam jackets that we had relegated to our suitcase for the trip.

Since the visit in 2000 had been for work, there was little time for sightseeing. Except for team outings on some days, we’d eat dinner within the mall complex where our office was, and head back to the office to put in another hour or two of work. We did get one free Saturday, which we used for a visit to Ocean Park - a local theme park. This was five years before Disneyland opened in Hong Kong. I distinctly remember wanting to ride the cable cars but being prevented from doing so by bad weather. In fact, they had to shut down most of the rides that day and I had to be content with riding, what must surely be, some of the highest escalators in the world.

This time, we didn’t visit Ocean Park or Disneyland. Instead, we trekked for a couple of hours through the Dragon’s Back trail. It was a cool but sunny day and our trek offered panoramic views of the water, distant green hills and high-rise apartments nestling among them. 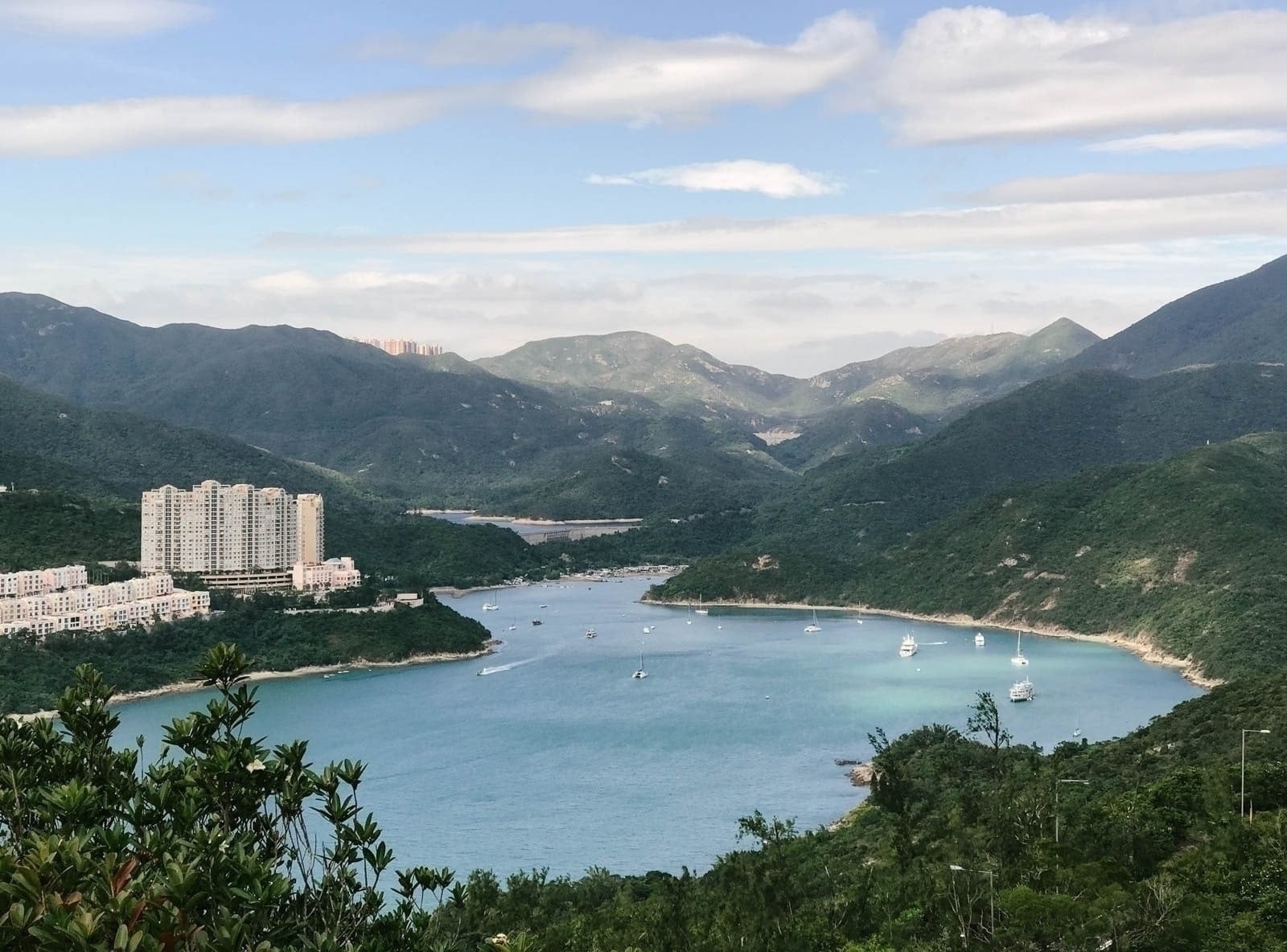 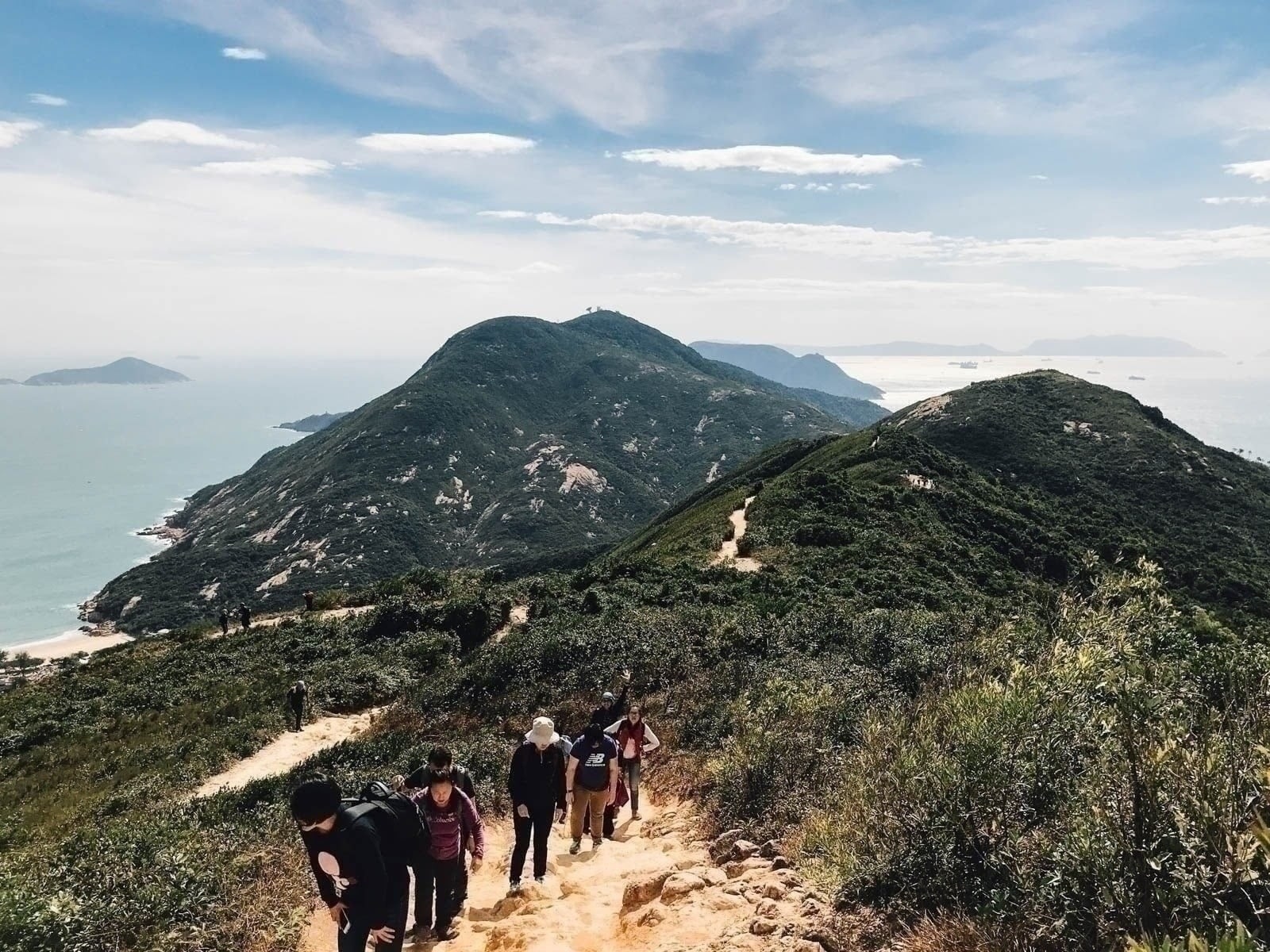 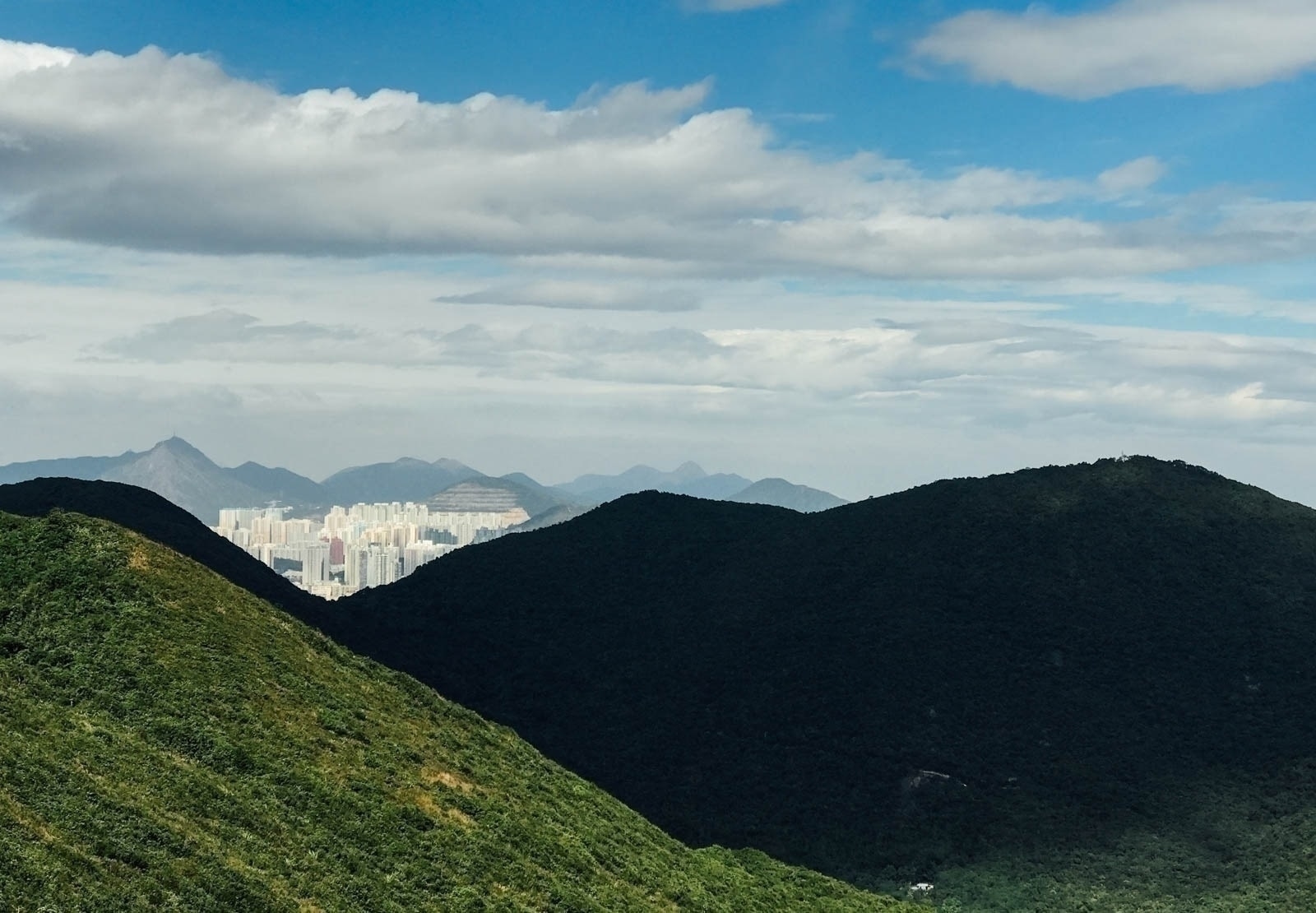 After the trek, we found ourselves at a small beach nearby. A beach-side shack served us a serviceable omelette and local beer. From where we sat, we could see surfers of varying degrees of skill trying to catch waves. Given how nippy the air was, the water must be cold but it didn’t seem to bother the surfers.

Another memory that I had bored the wife with several times, and which seemed to grow more vivid on each telling, was that of taking a funicular up and down Victoria Peak. When the funicular train was half-way up, it had seemed that the multi-storyed buildings were sticking out of the hill at an impossible angle. That this was at night and the buildings were well lit, had made the illusion all the more spectacular. It is one of those things that is hard to describe in words.

Since then I had ridden at least two more funiculars (one in Istanbul and another in Bergen) but since neither of them had resulted in a view anything like what I had witnessed in Hong Kong, I had begun to ascribe this phenomenon to my imagination.

We hiked up to Victoria Peak this time. By the time we were at the summit the sun had set and the Hong Kong skyline was brightly and colourfuly lit. 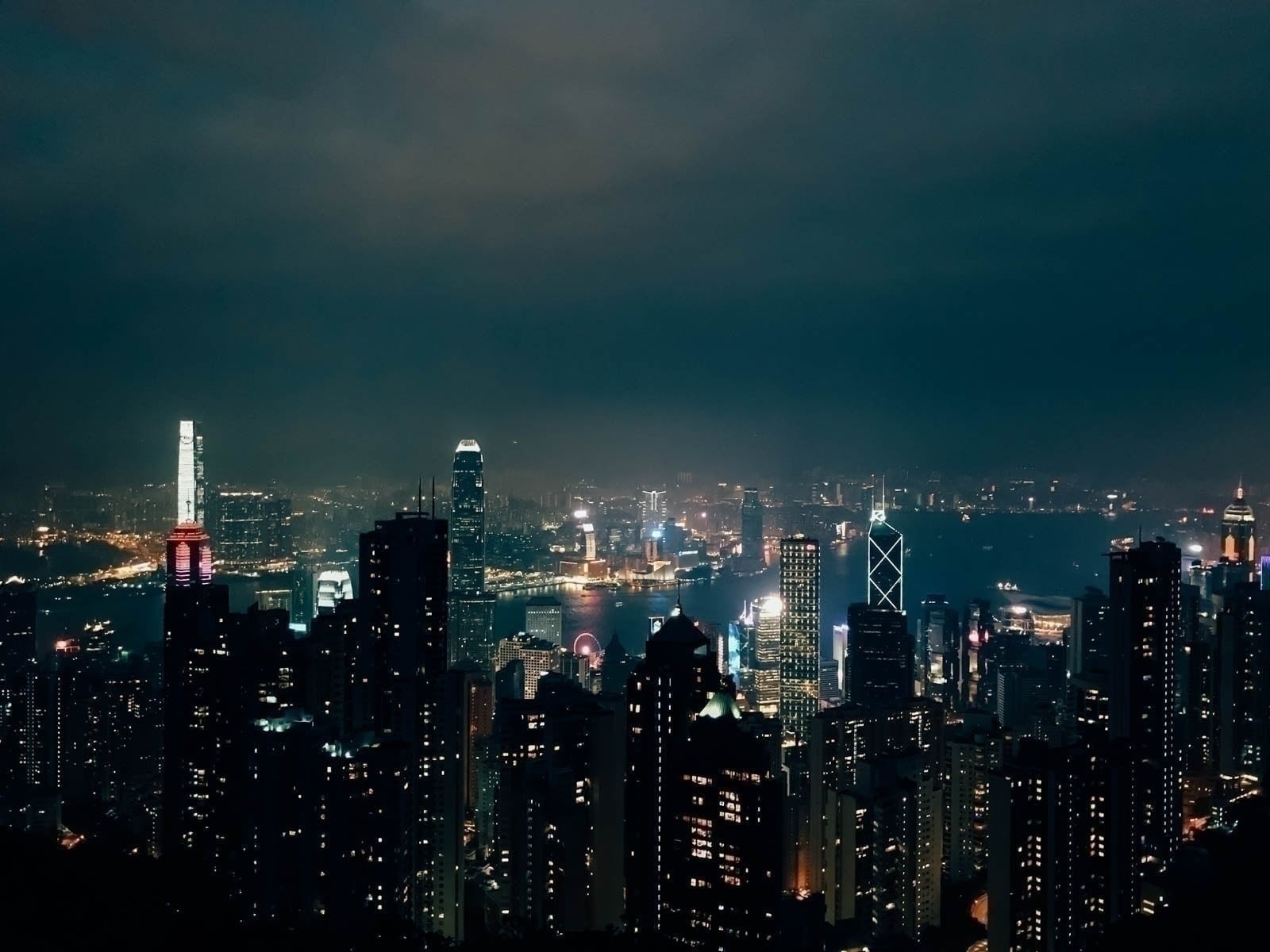 View of the Victoria Harbour from Victoria Peak

To my delight, the funicular service was still operational! I don’t remember waiting too long for tickets back in 2000, but in all these years the funicular has become a very popular attraction. We queued up for some 25-30 minutes for our turn in cold and windy conditions (my thin jacket was pitifully inadequate). The funicular began its descent and within seconds it reached a point from where the buildings began to look skewed! There were a lot more buildings this time - many right along the tracks, so the effect was somewhat diluted. But overall, the illusion retained much of its original potency. I hadn’t imagined all of this after all5.

On the trip 17 years ago, food in Hong Kong was one of the biggest shocks for me. Vegetarian food was hard to come by, and when it did, I’d find the smell and the taste overwhelming. The so called “Chinese” food I had been eating all my life in India was clearly a lie. I made mine and everyone else’s life miserable by dragging us to Indian restaurants on flimsiest of pretexts6.

Food this time wasn’t a problem. I am still a vegetarian but after traveling for all these years I am a lot more flexible - adventurous even (as much as vegetarianism allows). Over the last few years, it has also become a lot easier to get vegetarian food the world over. On our first night we did play it safe by going to a Pizza Hut and were surprised to find cucumber on our pizza. It was almost as if the chef was shown a picture of the pizza and mistook courgette for cucumber.

The ride back to the airport

Hong Kong’s Airport Express service allows you to check in your luggage at the metro station itself. This somehow feels even more novel than it did on my first trip here. The ride to airport was fast and comfortable. The density and scale of the apartment complexes rushing past on a clear sunny day outside made me feel like I was part of an opening sequence of a futuristic science fiction movie. But then this is exactly how Hong Kong had felt like on my first trip. 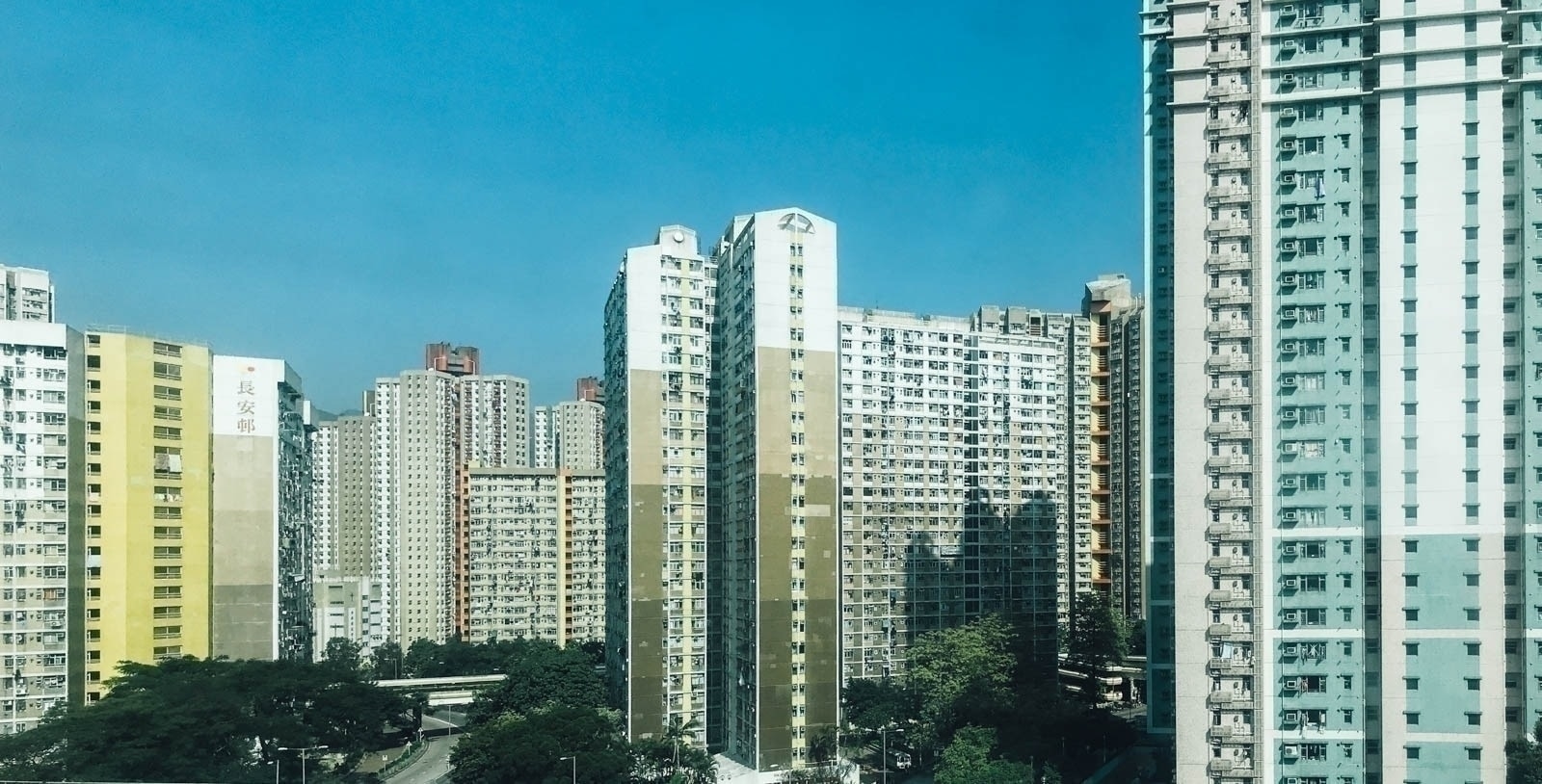 The tiled façades of Porto It’s impossilbe to visit Porto and not notice the colourful, ceramic tile-adorned façades of houses there. On our trip this week, I took pictures

2017: My year in music Kurt Vonnegut in Timequake: I say in speeches that a plausible mission of artists is to make people appreciate being alive at least a little bit. I