The story of my integration tests (Inburgeringsexamen)

Warned a notice stuck to one of the pillars in the waiting area of my exam center. I read the Dutch word “fraude” as the German word for joy - “freude” and in my head translated the sentence to:

We always report joy to the police

Clearly not a promising start for someone there to prove his proficiency of the Dutch language. While the notice was meant to deter the would-be identity fraudsters, looking at the doleful, anxious faces in that room, you would think that my interpretation might have been the truer one.

Naturalization in the Netherlands requires you to take the dreaded “integration” tests. Your ability to listen, speak, read and write the Dutch language is evaluated. You are also tested on your knowledge of the Dutch society1. You could stagger these tests across different dates, but in wanting to yank the proverbial band-aid in one go, I scheduled all of them on the same day.

If there is one thing the education system in the Indian subcontinent prepares you well for, it is the taking of exams. A colleague from Bangladesh, upon learning that I was preparing for my integration tests, had sagely reminded me to master the exam and not the content. Still, that exam-cracking muscle had atrophied after not having sat for a test in two decades2.

The wife had already been through this rigmarole so I could self-study from course material she had accumulated. A few weeks before our exam date, she, I and a colleague had enrolled in a batch of 10 personalised classes to brush up on our grammar and to improve our conversational fluency. This was about as ready as I was going to be.

As I am cartographically challenged, it felt prudent to familiarize myself with the route to the exam center a week in advance. To reach the building, a stone’s throw from the tram stop, you’d walk along a park that had a towering statue of a bemused, grizzly bear holding a pillow3. While it made for a memorable landmark, it also captured the menace of the upcoming exams perfectly. 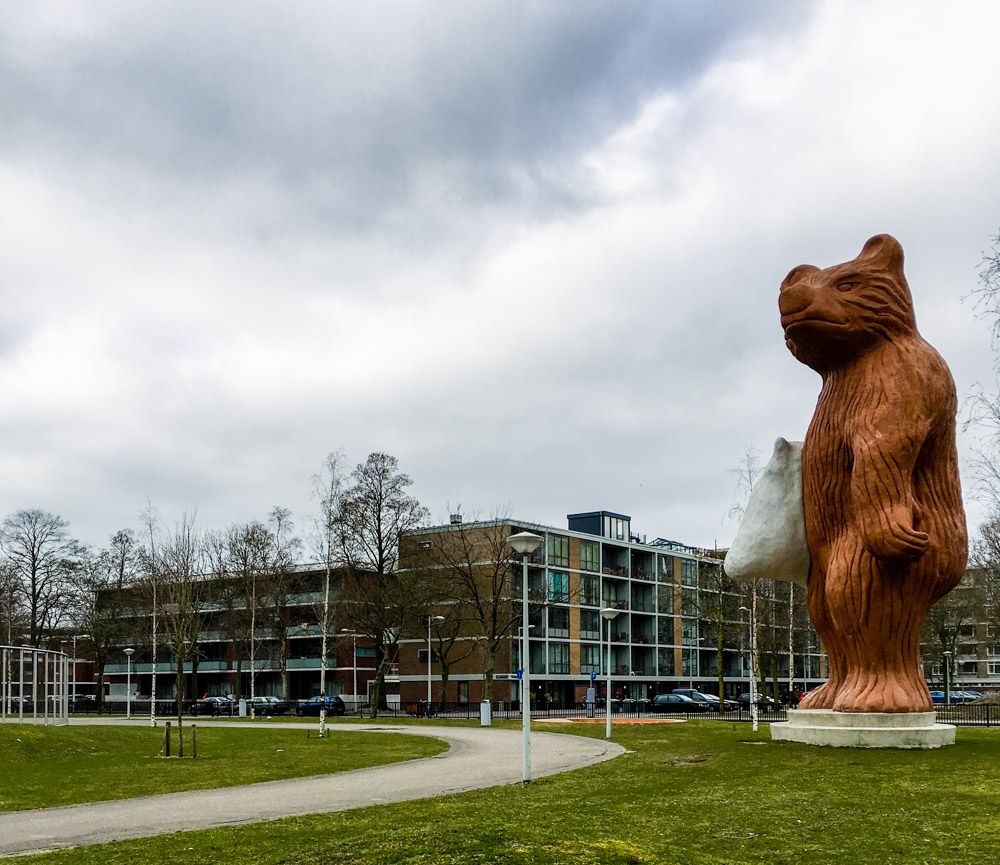 As I absent-mindedly flossed my teeth the night before the exams, I braced myself for a rough night of assorted nightmares. They would all revolve around the theme of time running out before I had finished writing my test. I added to that repository of bad dreams by going a little too hard on a tooth and dislodging an ancient root-canal filling from it. Fortunately the tooth, now sans its filling, didn’t hurt or require immediate medical attention. As expected, I slept fitfully.

People from all walks of life had come to give the integration exams. With my employer sponsored knowledge-migrant4 visa, I and the wife could live and work here as long as the employer would sponsor my visa. Other classes5 of visas mandatorily require you to “integrate” within 3 years.

All languages are hard when you are past 30. However, getting to the A2 level Dutch proficiency required for these tests wasn’t particularly challenging6. I also grew up speaking Hindi and English so I was quite accepting of all the idiosyncrasies of Dutch - all languages are made up and you shouldn’t label the rules of one language as irrational based on other languages you know. Moreover, Dutch uses the latin alphabet and after mastering a handful of phonological rules, I could start reading and building my vocabulary. As widespread as the latin alphabet is, neither it nor literacy are universal. I wondered how many people in the exam hall had to first overcome the additional handicap of learning to read the Latin alphabet.

I did well on the reading and the knowledge of the Dutch society tests, a little less well on the listening and the speaking tests and only barely passed the writing test. While all exams were on the computer, the writing proficiency exam was (naturally) of the pen and paper variety7. I would think in long, complex English sentences rich in metaphor and idiom and then realize that my Dutch vocabulary and grammar is too pitiful to allow a translation. Also, some of the questions that involved writing long-ish passages were quite contrived and I would’ve struggled regardless of the language8.

Still, clearing all exams in a single attempt felt good. However, unlike this clichéd illustration from one of our adult study books, I still haven’t felt the urge to put on the clogs, roll down on a wheel of cheese and scatter tulips along the way all the while daintily holding, what surely must be, that precious inburgering (integration) diploma. 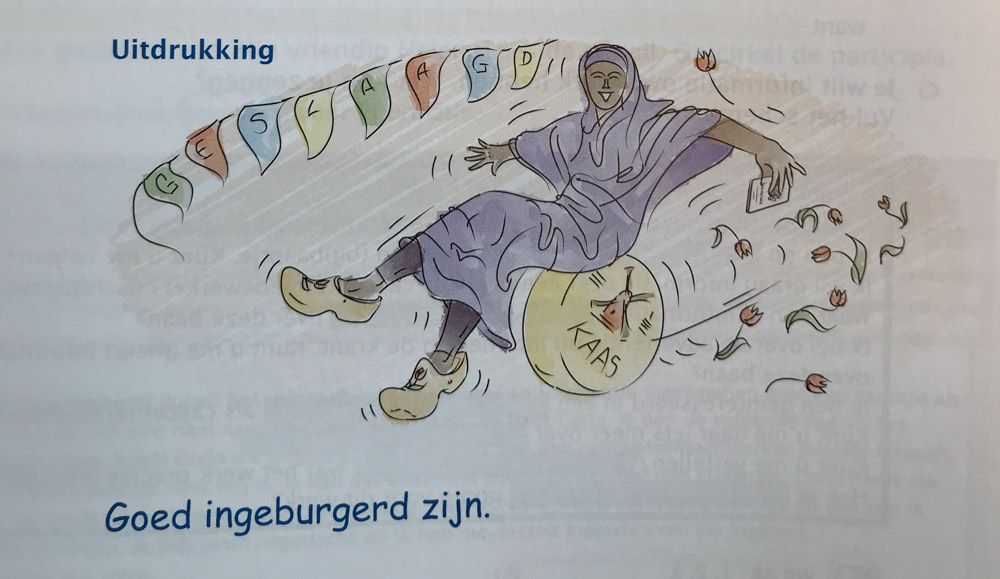 2020: My year in music Music is one of the biggest joys of my life. In 2020 it was also a source of profound comfort and, in addition to whatever little I managed to read,

The library during the lockdown On the evening of 13 Mar 2020, I received an email from the library announcing that all branches of the library would close temporarily. A couple of