Come spring and the cherry blossoms are among the first ones to bloom in Amsterdam’s Westerpark. Last year, a few more of these had been planted along the pedestrian path near the entrance. They looked spectacular this spring. They also seemed to attract a lot of parakeets who feasted relentlessly on their flowers. Were the parakeets not moving, I would’ve mistaken them for an exotic tropical fruit growing amongst the cherry blossoms. A video showing the havoc they wreaked.

It’s been more than a year now since I stepped inside an airport, let alone an airplane. The last time I flew was on a trip back from San Francisco after finishing my onboarding at my new employer. There are things about that trip that in hindsight feel downright rash:

Now of course, a little over a year ago, we wouldn’t think of any of this as rash. The world was sleepwalking into a pandemic. And yet, back then, unburdened by thoughts of things lying in wait for us just weeks down the road, the trip was wonderful. Admired the graffiti covered walls of Chinatown (which was surprisingly2 empty): A graffiti in Chinatown

Enjoyed walking through the city pausing at random bookshops and cafés for breaks.

Met some old friends, and couldn’t meet others as the trip was cut short by a week - not out of superabundance of caution for the unfolding pandemic but because of a recruitment event3 that required me to be back in Amsterdam.

On our last morning in San Francisco a light fog hung high in the air. It shrouded high-rises and gave the city a slightly surreal feel. While crossing a street, I saw a giant painted portrait of Greta Thunberg through this fog-filtered light. Little did I know then that shortly we’d be forced to give up flying collectively in numbers and for a duration perhaps beyond her wildest dreams. A portrait of Greta Thunberg in SF

One last act of rashness on that trip? Taking an Uber Pool (do they even offer that as an option these days?) to the airport. Rendered somewhat less rash by sheer luck - no one else happened to share the ride.

The Night mode on iPhone

As the winters begin to set in, the days in Amsterdam get shorter. One doesn’t have to stay up very late to do night photography.

I had first tried long exposure night photography some 15 odd years ago in London. It would involve carrying a tripod, setting up the camera (then a Canon EOS 350D), hitting the shutter release and waiting a few seconds. I lacked experience and the tripod I had then (a hand me down from an uncle) was a little rickety so it’d take a few attempts to get a good shot. But the end results always made it worth it.

The wife recently got an iPhone 11 and I was both sceptical of the recently introduced Night Mode and at the same time very keen to try it. So we went for a walk around the block after dinner and I took a few shots. I was immediately hooked: 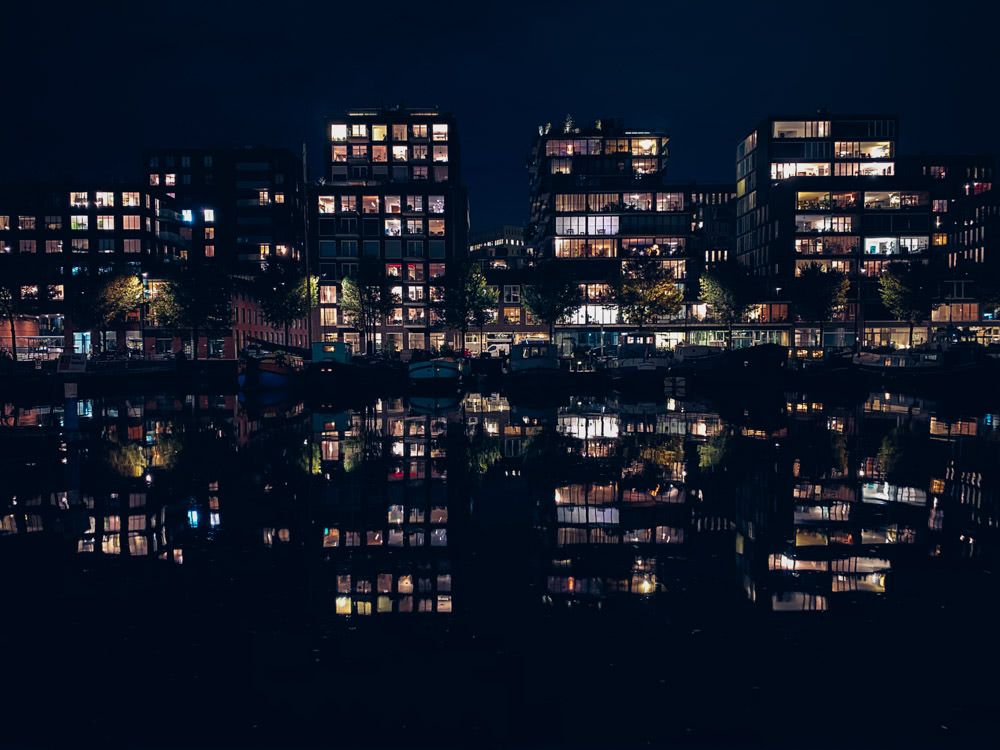 Westerdok on a still Nov night

The night mode turns on automatically and depending on brightness of the scene, picks an exposure of 1 to 3 seconds. You release the “shutter” (I use the volume control buttons on the iPhone) and hold your hands steady and that’s about it. Tripod not required.

Since then I pester the wife to borrow her phone regularly. Expect to see more night time photos in the coming days. 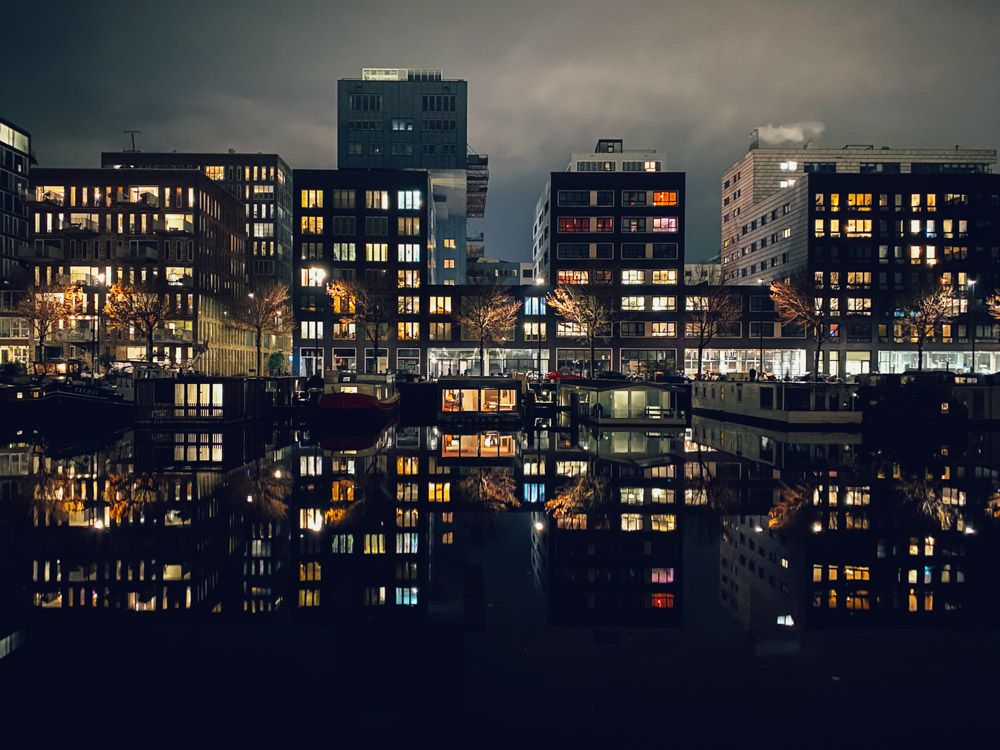 Westerdok on a still Dec night 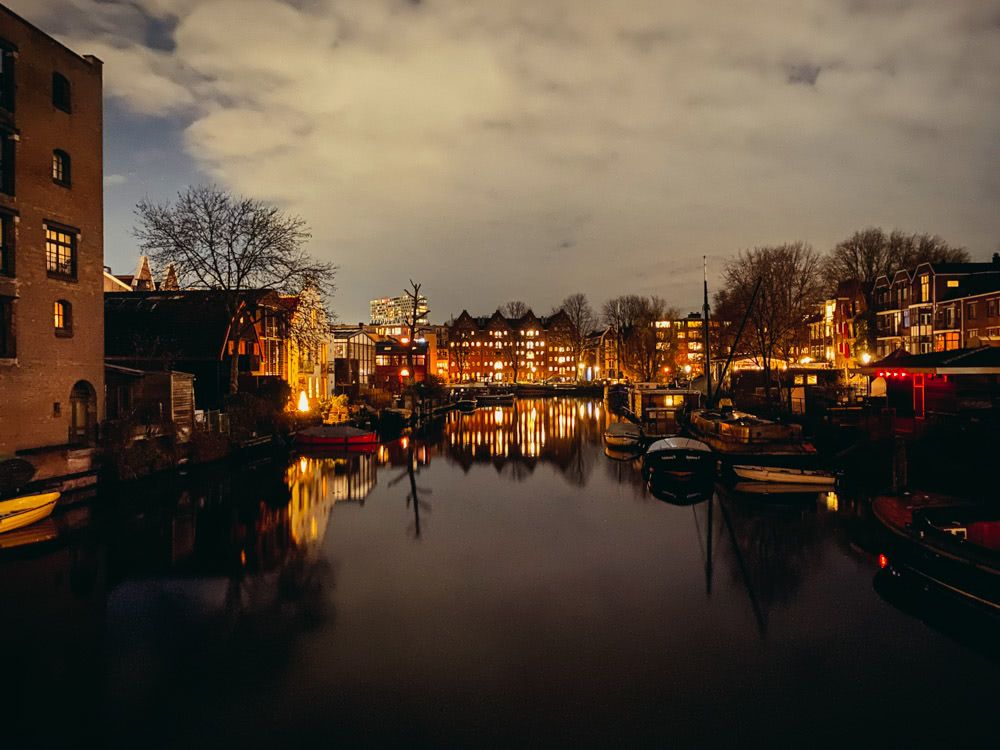 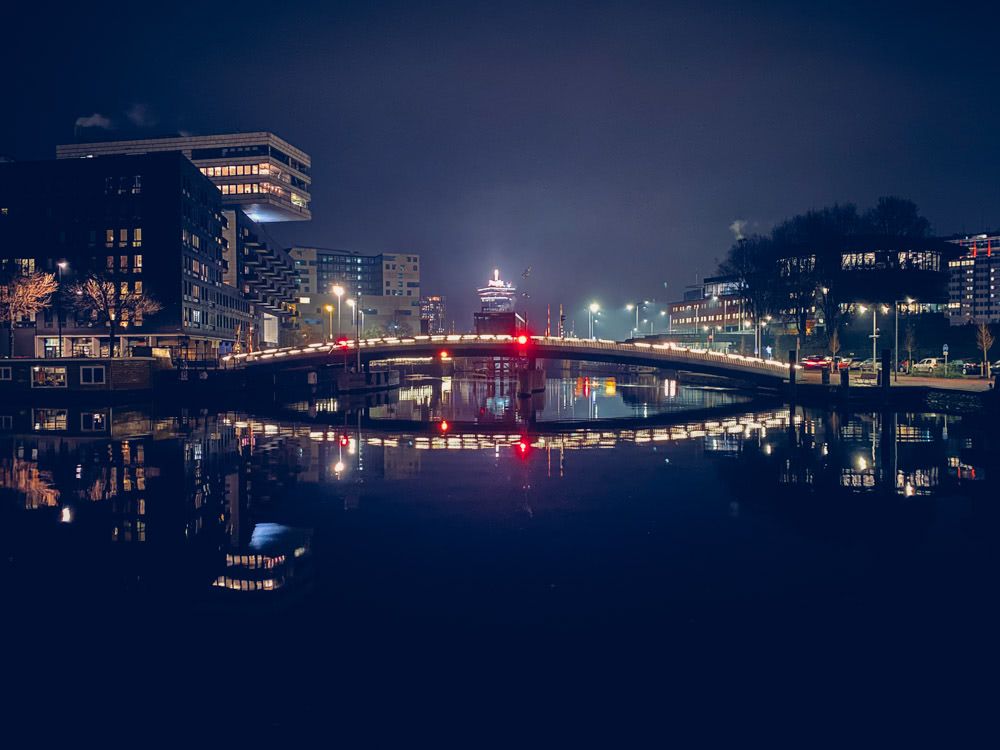 Something a little Blade Runner-esque

My only gripe so far is that while the “default” iPhone 11 lens supports Night Mode, the ultra-wide does not. Something they have remedied in iPhone 12. I am hoping that if I hold out another year, the zoom lens in the next revision will get it as well.

p.s. The wife pointed out that at a time when a lot of people would be traveling to run away from the cold and rainy Amsterdam weather, last year most people were stranded at home. So probably more than the usual amounts of homes had their lights on. To say nothing of extra Christmas lights. Also note the wide range of warm and cool tones of lighting.

p.p.s. I am also amazed at the dynamic range of the Westerdok shots. Despite many blown highlights, see how much detail of each house’s interiors is visible.

I was at Munich’s Kusthalle in Sep 2019 to see an exhibition of works by Canadian impressionists. I was carrying a small backpack which wasn’t allowed into the exhibition rooms. I turned back and located the public lockers to leave my bag in. Not only were they all taken, there were already one or two people ahead of me waiting for someone to come back and release one. I eventually located the paid cloakroom where I could drop my bag off. The walls of the cloakroom were plastered in promotional material from past exhibitions. It is here that I first saw a poster from an exhibition from many years ago, titled, Hammershøi - this modern Nordic Vermeer. The poster featured a girl at a piano - probably a hat-tip to Vermeer’s The Music Lesson. 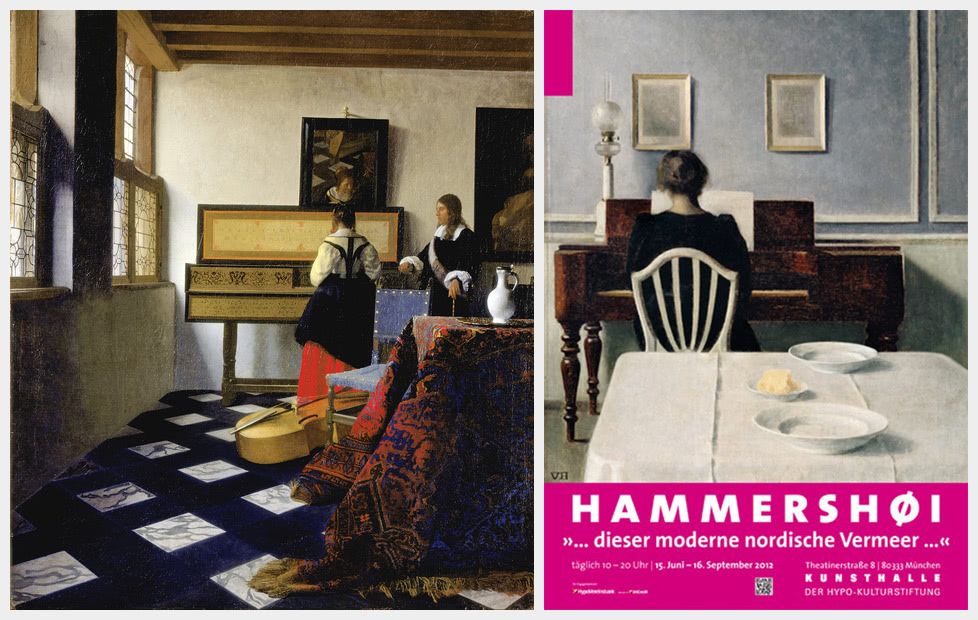 I thus discovered Vilhelm Hammershøi whom I now consider as one of my favourite painters.

Of late, I’ve been revisiting his works and have been mesmerised by them. I find his muted color palette and his depiction of shadow and light very soothing. They remind me during these days of being locked down at home, when we’ve all had more than our fair share of looking at doors, walls and windows, that even the banal, if you pay attention, is beautiful. 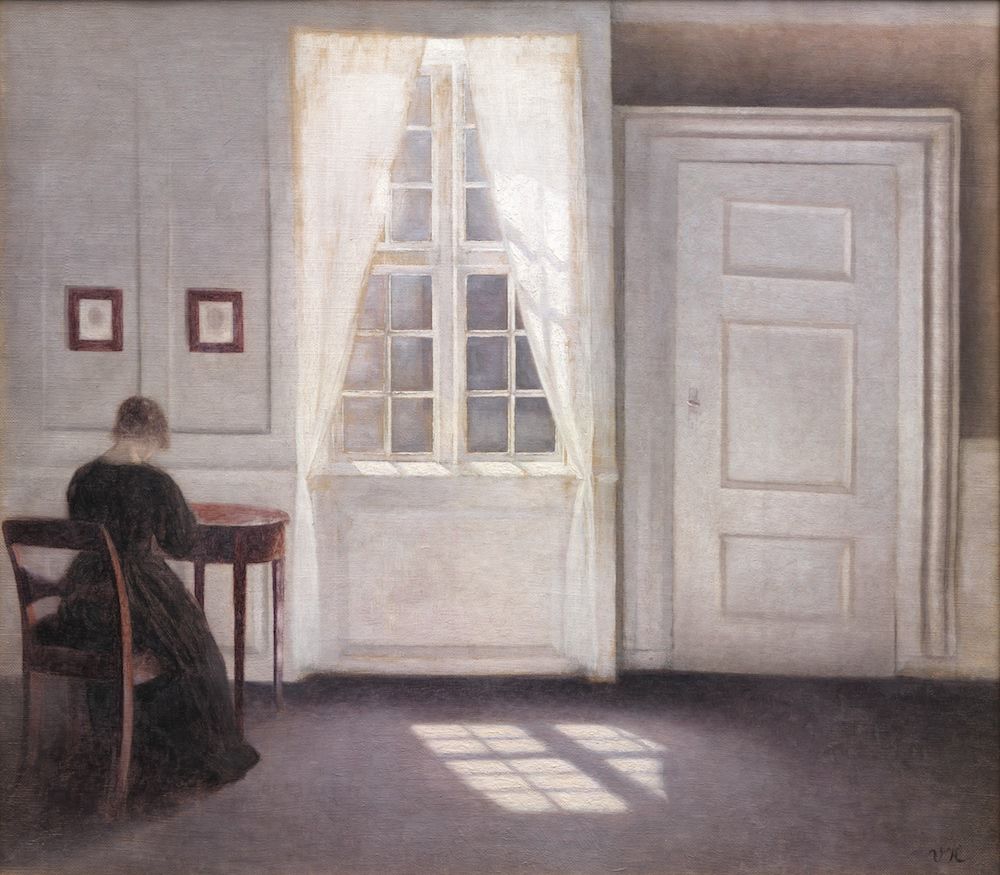 Interior From Strandgade With Sunlight On The Floor

p.s. Talking of Vermeer, there was a documentary a few years ago about someone trying to recreate The Music Lesson. Worth a watch.

p.p.s. I miss traveling, among other reasons, for the serendipitous discoveries one would make along the way.

As October 2020 rolled in and the number of Covid-19 infections and hospitalizations continued to rise, it was quite clear that the Netherlands would have to enter another lockdown. I thought we’d have learnt our lesson from March and it’d be a rapid and total lockdown so perhaps we could open up in a limited way for Christmas.

What we got instead was a dithering, half-hearted thing - as if the way Covid-19 spreads was still shrouded in some deep cosmic mystery. Restaurants were the first ones to shut down. However, restaurants attached to hotels were allowed to stay open. Not only did some of those subvert the rules by charging a small fee to “check in” the customers into the hotel, a couple of these attached restaurants we walked past, weren’t observing any social distancing1. Offices were closed but museums, cinema halls and schools remained open. You couldn’t have more than two people over at your house in a day, but you could go pray together with whatever number of people your place of worship allowed2. As if the virus cared.

By November-end it was clear that harsher measures would be needed and on 14th December we were placed under a hard lockdown till 19th January 2021. Given the impending threat of the more readily transmissible variants doing rounds in the UK, South Africa and Brazil, the lockdown was recently extended till at least 9th February 2021.

All restaurants (including those attached to hotels), shops, schools, museums, cinema halls etc. are closed. Thankfully, restaurants are open for delivery. Essential shops such as grocery stores and pharmacies are open. It was unseemly to see a couple of chains try and push the bounds of “essential” to stay open. In the end, the government intervened and put a stop to these shenanigans.

Sadly, the vaccinations here have been off to a slow start and have been beset with controversies around who is included in the first wave and when exactly they could expect a shot. To say nothing of supply shortages, reckless talk of delaying the second booster shot, or worse, mixing up different vaccines. Makes you wonder why they bother going through clinical trials and a lengthy approval process. At least they have a plan. But with the cabinet here having resigned (due to another scandal unrelated to Covid) and elections due in March, I have little faith in our ability to stick to it. 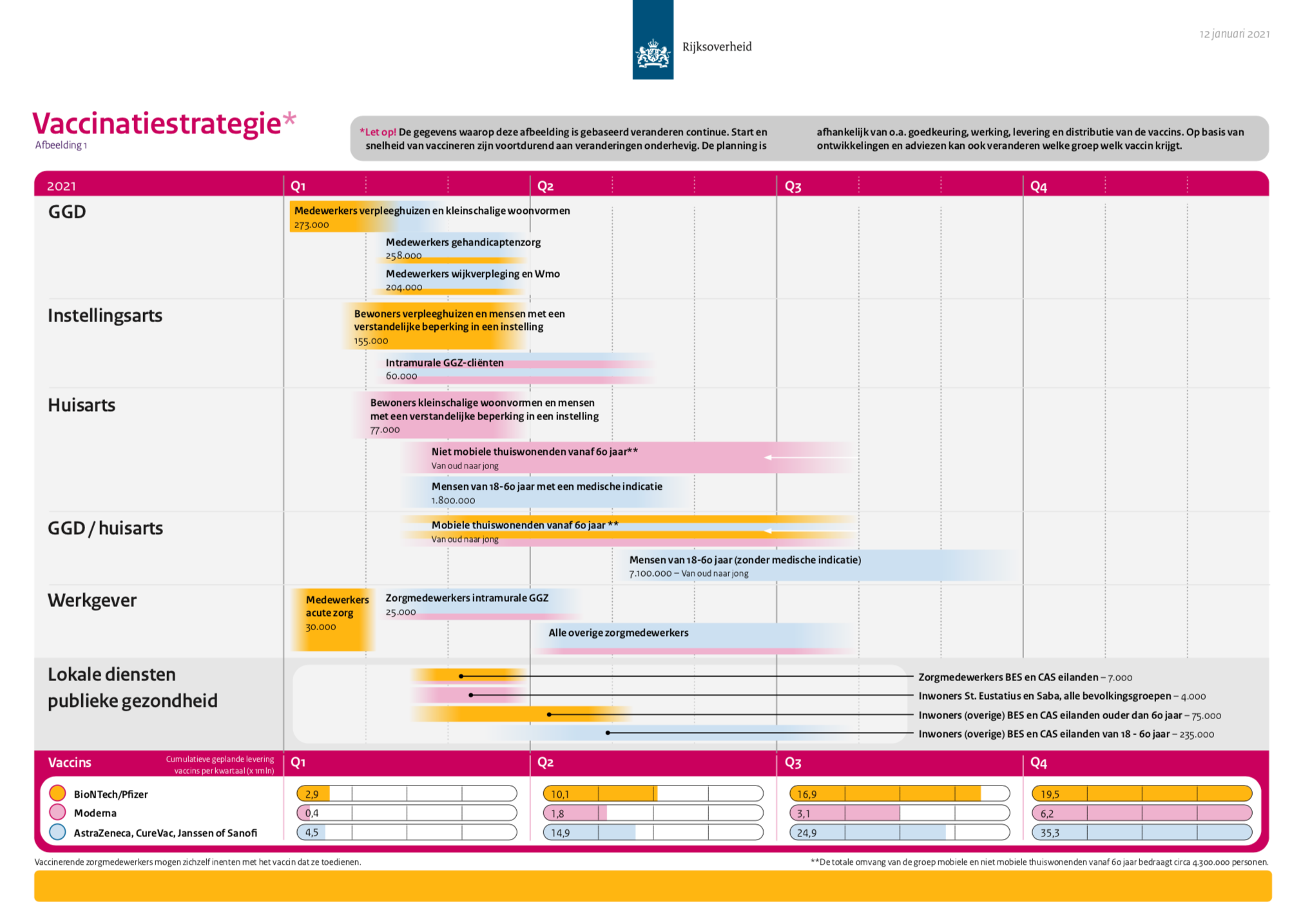 Meanwhile, like elsewhere, there is some societal unrest here too. Yesterday there was a demonstration at Museumplein that was ended by mounted police and a water canon. Over a hundred people were arrested. There is now talk of a curfew from 8:00 PM till 4:00 AM3.

On the brighter side (literally), the days are getting longer. Yesterday, after many weeks of slinking away early, the sun set at 5:00 PM. Today, it went down at 5:02 PM. Every minute helps. A couple of days ago, we got a little bit of snow that made the city look like it was right out of a fairy tale. On those rare days when the sun is out, we can hear bird song and even see birds make a short stop at our balcony. We better get some outdoor furniture for the balcony because it looks like we’ll be spending a lot of time there…